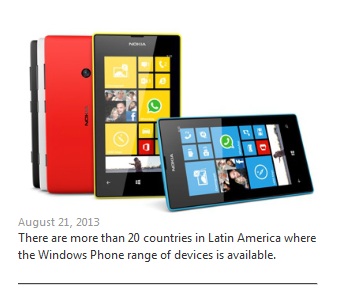 According to recently released IDC tracker report,a very encouraging news has emerged for WP and Lumia fans. This report pegs Windows Phone as second most used operating system in Latin American countries. WP is ranked 2nd in Mexico, Colombia and Peru. In Colombia market share is about 25.6%. WP is ranked 3rd in Argentina, Chile and Brazil. Quarter on quarter growth was 12% for WP and it grown from 4th ranked OS to 2nd ranked OS.

The report shows that Windows Phone has been ranked second in Mexico for the second consecutive quarter, and in the second quarter of 2013, Windows Phone was also ranked second in both Colombia and Peru. It is important to highlight the fact that Colombia is one of the countries with the highest user preference ratings, with 25.6 percent of the market share. In other countries, such as Argentina, Chile and Brazil, Microsoft’s mobile platform has also grown in popularity, ranking third in the second quarter of 2013.

There was 12 percent growth compared to the previous quarter, during which the platform was ranked fourth on the Latin American market.

We will continue working alongside Nokia to offer more and more people in Latin America the holistic experience which Windows Phone has for them, in order to offer a more personalized smartphone which is the best for the Windows environment and the best hardware for people and companies.”