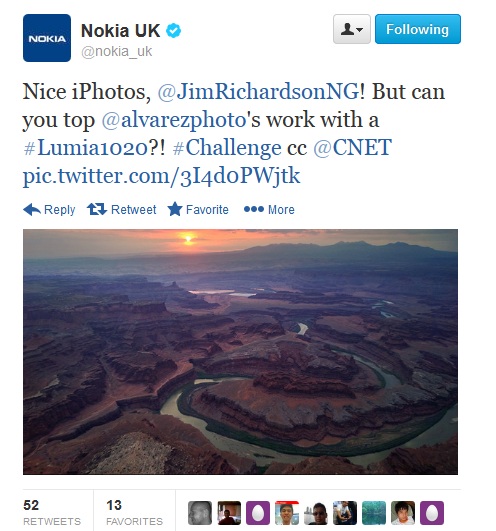 You may be able to recall Award-winning National Geographic photographer Stephen Alvarez using a Nokia Lumia 1020 to capture stunning images during a unique storytelling expedition in the iconic America West. He opined that Lumia 1020 performed like a DSLR every time.

Now, Apple which boasts of being the innovator has first copied the color profile of Lumias for its iPhone 5C and the Nokia’s tweet over this was re-tweeted for record number of times.

This time however Apple has copied promotional strategy of Nokia and has tied up with Nat Geo photographer Jim Richardson for doing similar photo shoot with its much hyped and less impressive iPhone 5S. Nokia UK is not one of those to sit back and left behind and has challenged them openly about surpassing the quality of Lumia 1020 which no other smartphone is capable of.

Nice iPhotos, @JimRichardsonNG! But can you top @alvarezphoto‘s work with a #Lumia1020?! #Challenge cc @CNET pic.twitter.com/3I4d0PWjtk