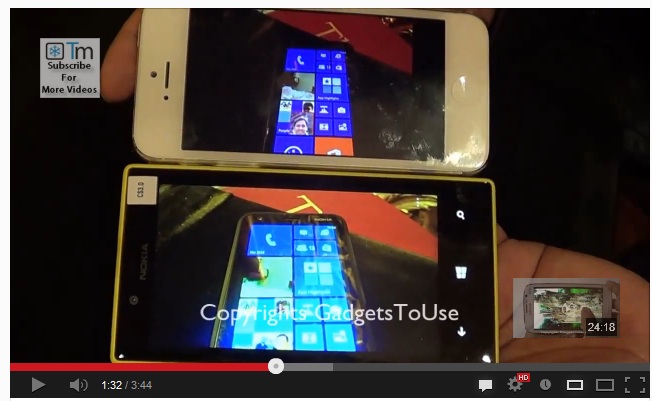 I came across this interesting comparison on YouTube and the camera on mid-ranger Lumia 720 impresses once again in low-light!! The reviewer has pitted it against Apple Flagship iPhone 5. Even before you label it as an unfair comparison, let me remind you that Lumia 720 boasts of largest aperture of F/1.9 seen on any smartphone and hence offers great low light imaging.

So, coming to comparison, the reviewer has clicked picture of a Lumia with both iPhone 5 and Lumia 720 and the comparison between the images is not done on a PC, but while still on the device only. It is easy to note that Lumia 720 gathers more light and the resulting image is brighter than what has been capture with iPhone 5. The comparison could have been better, had they tried to shoot a darker object here, as that will show the real difference between light capture from both cameras. Check the video below.

Nokia 5.3 and Nokia 8.3 5G cameras show that Nokia Mobile, the smartphone imaging heavyweight may be set for a comeback

Why Nokia Mobile should bring Nokia C5, C6 and even a Nokia C7 quickly to market

POV: It is the right time for Nokia Mobile (HMD) to reprioritize Indian market