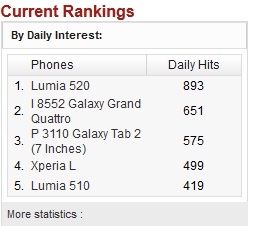 It has been some time, when we last brought a sales performance report of Lumia from India. Though , nothing much has changed since then and Lumia 520 is still doing pretty well at many important retailers. One of them is UniverCell which has the  most extensive retail presence in the country and Lumia 520 is still the most popular device at the retailer out doing competitors.

Coming to Saholic, both Lumia 520 and Lumia 920 are present amongst top sellers. Lumia 920 is certainly benefitting from recent price cuts.

At major retailer Snapdeal which sells 1176 mobile items, Lumia 520 is still one of the top-selling phones.

It is really positive news for Nokia seeing there Lumia devices doing well across so many retailers in India.