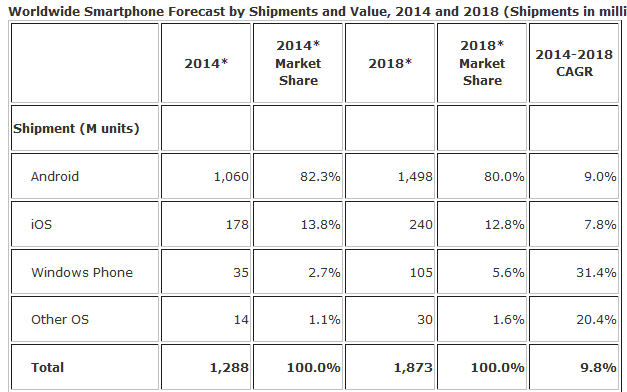 IDC predicts Windows Phone shipments for the full year of 2014 at 35 million, which is much in line with the volumes sold in last three quarters. In Q3 2014, Microsoft reported 9.3 million Lumia shipments, and educated guesses put Q2 and Q1 2014 sales around 7-8 and 8 million.

So, may be in Q4, we will see around 10 million Lumia device sales. It certainly doesn’t sound too impressive but Nokia to Microsoft transition also needs to be taken into account as one of the factors affecting the sales focus. This shipment volume makes Windows Phone have 2.7% smartphone market share.

Coming to the prediction about future of Windows Phone, IDC throws some positive figures. Prediction for year 2018 stands at 105 million with 5.6% market share for Windows Phone. This prediction is certainly not revolutionary but evolutionary and Microsoft’s efforts in wooing low-cost smartphone vendors in emerging markets may bear fruit going ahead.

IDC, however doesn’t see much hope for an underdog OS to become a force in future,

From an operating system perspective, Android devices will continue to drive shipment volumes while iOS devices drive revenues. By 2018, Android will control 80% of global smartphones shipped and 61% of revenues, while iOS will control only 13% of volumes and 34% of revenues. With Android volumes so dominant, it is no longer a possibility for new operating systems like Tizen and Firefox to compete on price alone – any underdog OS must bring a radically different appeal to gain any significant traction.