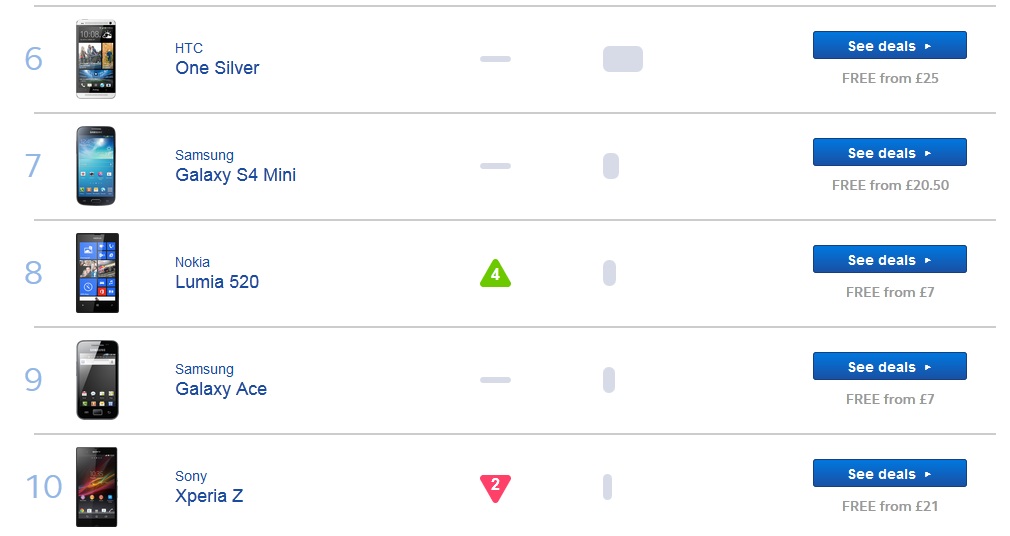 We have been covering and bringing to you sales performance reports about Lumia devices from around the world. Now, one of our reader “Tellus” has done a comprehensive survey from many markets and created a report which shows how well Lumia 520, 521 and 620 are doing in terms of ruling the best seller charts. One significant example in UK is Lumia 520 now finally entering the uSwitch’s mobile popularity tracker.

Apart from uSwitch tracker have a look at how well it is doing across various retailers in different markets. Thanks Tellus for creating it,

I have followed several Selling list worldwide, and i have to tell that Lumia is starting to sell ver well this quarter.

In amazon UK Lumia 520 has often been on top 5, but now it is on first Place. Also it is on 2 other importent list, most wished for and most gifted phone.

Amazon US have had Lumia 520 and 521 topping the no contract list since this quarter has started.

Amazon China where Lumia hasnt been so much on the toplist has now Lumia 520 on 3rd Place for a couple of Days.

Lumia 925 is the 5th best Selling phone at singatel.

At phonlimited in Uk Lumia 620 is topping pay as you go phones and Lumia 520 is at third Place.

Lumia 521 is topseller phone at tmpbile in US

Lumia 520 is at first Place at Snapdeal in India. The phone is at many other toplist in India also.

This is interesting to see. Before you could see Lumia on some toplist for short periods, but now it seem that they are on most of the list and fr long periods. I Think Lumia 520/521 is selling in record numbers now. I guess we will pass 10 million lumias this quarter, but still sad that our more expensive phones doesn’t sell good as this. Lumia 1020 is slowly climbing on lists, we will see what happens there when pgone releases in other country than US.