Skip to content
You are here
Home > Latest Posts > 5th Month in its release Lumia 520 most popular at UniverCell and 3rd top seller at Snapdeal in India. 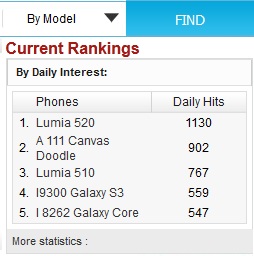 It has been full quarter and two more months in release for Lumia 520 in India. This device has proven to be a major hit and has climbed the WP market share charts to become top sold Lumia device ever in India.

Even now 5th month in its release, its momentum doesn’t seem to cease and it continues to dominates sales charts across various retailers.

At UniverCell, the major cell phone retailer it continues to be the most popular device by no. of daily hits. Very impressive indeed considering number of devices released in last 5 months in India.

Coming to another major retailer Snapdeal, it is ranked 3rd according to sales out of 1368 phones, which is impressive.