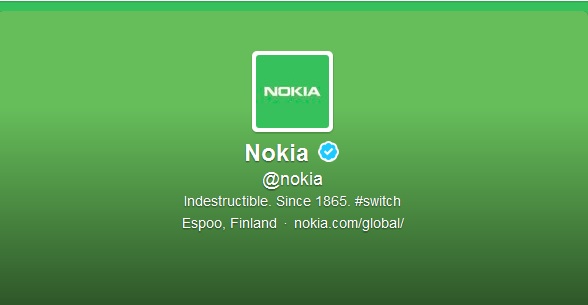 This is somewhat surprising and interesting at the same time!! Overnight, all Nokia social channels have got draped in color Green, a departure from normal Nokia Blue. Now, there is no known reason behind this change, so we can make some educated guesses.

Is it for welcoming Nokia Normandy with Android to Nokia Fold? The Android green is somewhat different though, and Nokia’s invite for MWC has hues of Green as well and invites to “meet us under the tree”.

So, is it some kind of Green environmental sustainability related push, which may also be a big possibility knowing Nokia well.

But, Nokia has also teased this Green color on Snapchat as reported on Reddit. More interesting though is this droid like image made up of tiles posted by Nokia India and Australia. It has been posted to look like a heart but on looking closely it looks like droid made up of tiles.

What are your guesses then?