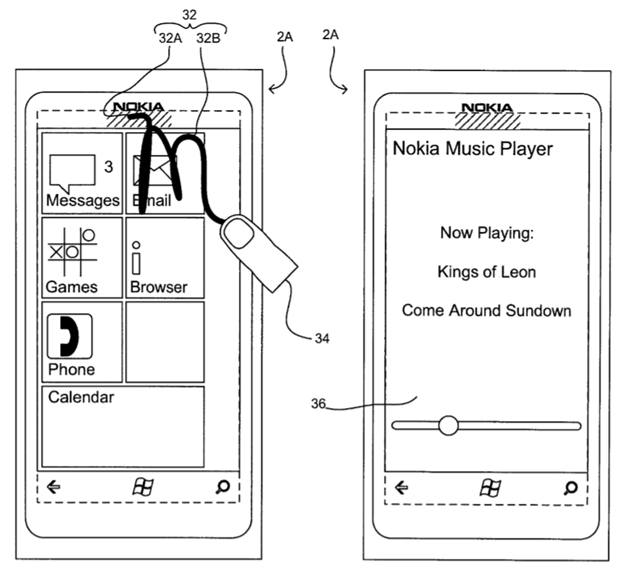 WMPU has reported about two Nokia patents, which reveal how seriously Nokia is working towards bringing gesture based interaction to Lumias. We have earlier covered Nokia patent  about “Hover-based interaction” or something which Nokia may finally bring to Lumia range as 3D-touch, according to our sources.

The two patents in question also reveal hover and gesture based interactions for accomplishing tasks like File transfer, launching search and apps, dialing contacts and launching search in apps.

One of the patent reveals hover based file-transfer between devices. All, you need to do is hover over the device screen and towards the intended receiver, and file-transfer should take place. The patent talks about 3D-interaction as means of providing versatile and intuitive ways to interact with their devices

Touch screens are used in many portable electronic devices, for instance in PDA (Personal Digital Assistant) devices, tabletops, and mobile devices. Touch screens are operable by a pointing device (or stylus) and/or by finger. Typically the devices also comprise conventional buttons for certain operations.

Three dimensional (3D) content display techniques and 3D interaction, or sense of 3D interaction, have been under development also for portable electronic devices. It has been suggested to apply also the space above a touch screen surface as further means for user inputs. People who are using mobile devices generally wish to have more versatile and intuitive ways to interact with their devices.

The other patent talks about a “SYMBOL RECOGNITION ENGINE” which enables identifying gestures on the touch-screens and responding with some defined actions. These actions may vary from launching search and apps to dialing a contact to launching search in apps.

NPU understands that the patented features have really good chance of making it to future Lumias. Especially, the 3D-touch coming with next-gen Lumia will feature hover-based interaction to the level not seen before on other smartphones and it will be intended towards making the interaction fun, task accomplishment easier and more intuitive.

Thanks Troll for the tip. Cheers!