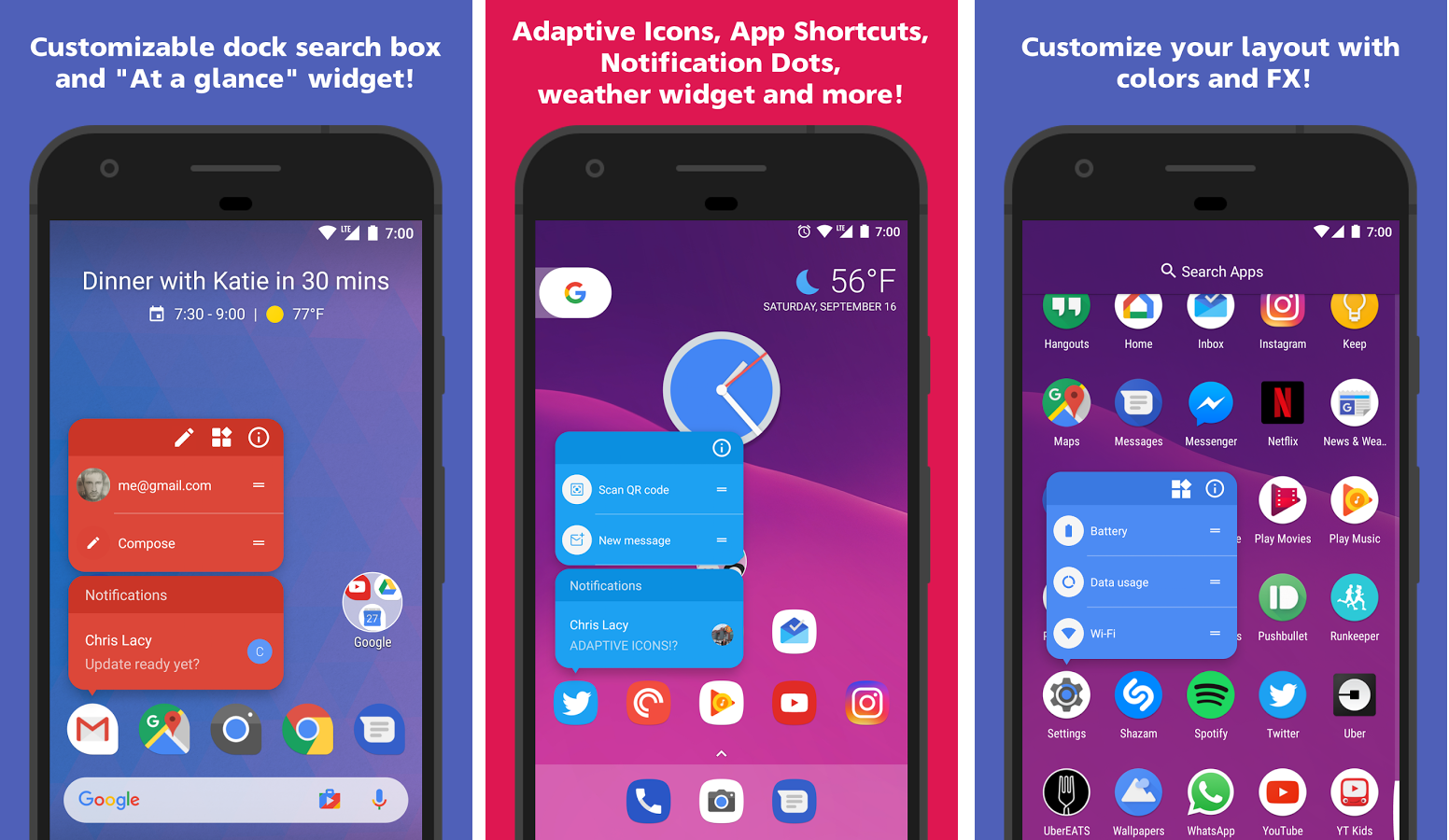 Android is an open-source OS and is a platform that lets you customize your smartphones the way you want it. It gives you many customization options like Launchers, themes text, fonts, widgets, and much more. Nearly everyone who has ever use an Android smartphone is aware of what launcher is. If you don’t like the home screen of your phone you can just change it by installing a launcher or a new theme.

So, in this Best Android apps article, we are covering the best Android launchers that you can pick up from the Play store. We are also sharing our opinion about why they are the best.

We have already published many posts in our best Android apps series showing you the best apps in different categories.

Nova launcher is one of the very old launchers since the starting days of Android OS. It is clean and full of tons features. Some of the main features of Nova launcher include support for themes, icon packs support, color control, customization options in the app drawer, widget support in the dock and much more. With Nova launcher, you can backup your home screen and other launcher related settings and you can restore it when you switch to a new Android device.

This comes first on our list as it’s one of the fastest and has the best features with clean UI.

Now finally Microsoft has changed the name of Arrow Launcher to Microsoft Launcher. This launcher also doesn’t need any introduction as it has all the innovative features available that you would expect.

One of the most interesting features of Microsoft launcher is the integration of Microsoft services like calendar, email, to-do list and Microsoft PCs also. With Microsoft Launcher, you can keep all of your favorite people at your fingertips, you can search the web through this, you can even get a personalized look and much more.

It comes with Pro version which is paid one but gets, even more features and improved settings.

Evie is also one of the launchers that we’ll recommend to our readers. The reason for recommending this is launcher its lightweight profile and nice features. Coming to the style and features the Evie launcher uses drawer inspired by Pixel launcher, universal search for all of your content like movies, contacts and much more. Other important features to discuss are alphabetized app drawer, intuitive design and good enough personalization options.

This Android launcher is like by many for its app hiding feature implementation and its performance. But it also brings a lot of customization options with itself. The UI, however, remains very close to the Stock Android without bloatware.

It is an entirely free launcher that improvises over the Pixel launcher while keeping close resemblance in the looks department. Features include Drawer Categories, the integration with Android Recents, contextual data at a Glance, icon pack support, Google Now integration (with an optional and free plugin), adaptive icons, and various other customizations.

It boasts of a minimalistic and clean UI that works admirably well and will appeal to the fans of minimalization. Performance is top-notch and it is optimized for one-handed use. It is still in early access but a great option to look for if you want to try a new Android launcher.