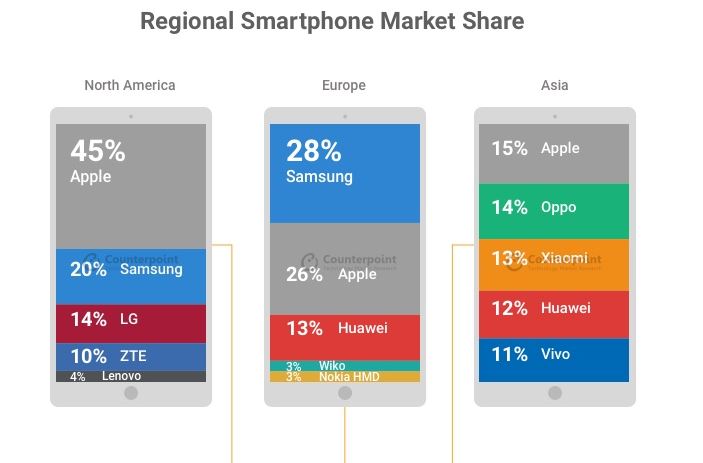 We have been reporting about Nokia Smartphones and feature phones showing good traction in Q4 2017. In fact even HMD confirmed in its MWC 2018 presentation that Nokia is one of top 5 smartphone brands in 15 markets. Now, CounterPoint Research has posted a regional break-up of vendor share of Smartphones and overall handsets for the Q4 2017.

It seems that Nokia smartphones enjoyed 3% market share in Europe in Q4 2017. This gave Nokia brand 5th rank in Europe when it comes to smartphones. We had earlier reported that In terms of smartphones, Nokia climbed to 3rd rank in the UK and was among top five vendors in Russia, Vietnam & most Middle East markets.

Coming to overall handsets, because of becoming the top Feature phone brand in Q4 2017, Nokia handsets enjoyed 4th rank in Europe and MEA with 7% and 8% market share.

HMD was able to sell more smartphones than many well-known brands like HTC, Sony, Google, OnePlus, Lenovo In Q4 2017. You can read the complete CounterPoint Research report for Q4 2017 here.