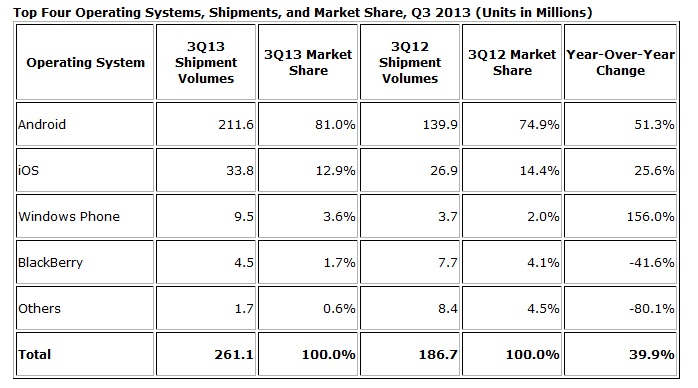 Also reaching a milestone was Microsoft’s Windows Phone, which grew an amazing 156.0% year over year. Granted, volumes started from a small base of 3.7 million units a year ago and overall market share is still less than five percent. But Microsoft’s efforts, with Nokia’s support behind it, helped drive the platform into multiple tiers and price points.

“Android and Windows Phone continued to make significant strides in the third quarter. Despite their differences in market share, they both have one important factor behind their success: price,” said Ramon Llamas, Research Manager with IDC’s Mobile Phone team. “Both platforms have a selection of devices available at prices low enough to be affordable to the mass market, and it is the mass market that is driving the entire market forward.”

Again, both SA and Canalys reports put the WP market share at 4%.

Putting it in one table,

So, what is clear from the above table that, we can safely assume 4% market share for windows phone in Q3.

Another important point to note is the decline in iOS market share. Canalys report mentions WP outselling iOS in 19 markets. Both IDC and SA reports show iOS market share decline in Q3’13 as compared to Q3’12. This is in spite of iPhone launches with claimed record one week sales of 9 million. May be iOS has already entered decline phase and march to second OS rank has begun for Windows Phone.