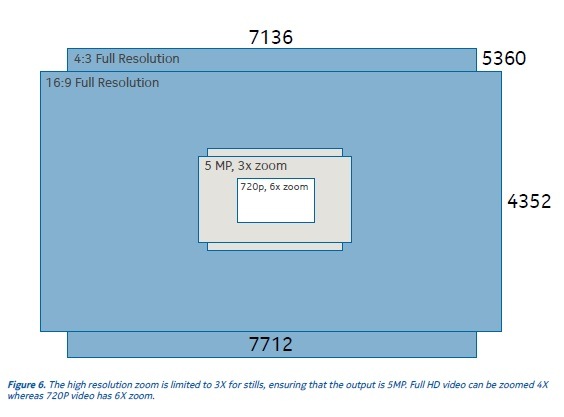 So, Nokia has manged to pull off what imaging enthusiasts wanted it do. To bring PureView phase1 and phase 2 together. They have not only brought OIS and oversampling together in Lumia 1020, but also improved the 41 MP sensor. The sensor on Lumia 1020 is BSI instead of FSI on 808 PureView. This helps in it doing wonders in low-light without flash captures along with OIS. Let us have a look at tech which makes Lumia 1020 a threat to SLRs along with the portability where it beats SLRS hands down,

With OIS and BSI sensor, Lumia 1020 has become a very potent camera phone from imaging perspective in any conditions. Again Nokia has introduced ProCam app which lets you control even the shutter speed and then possibilities are endless.

It has lossless zoom as well and at 5 MP you can have 3X zoom. Below image illustrates how it is achieved.

Stereo Rich-recording is for the first time introduced on a Lumia. It lets you record amazing audio not possible even with expensive cameras.

Have a look at the key camera specs of Lumia 1020 in below image.