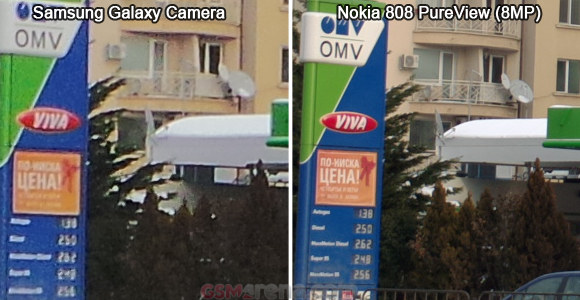 In weekend read 2 we are bringing to you reviews of PureView camera prowess of the two PureView smartphones from Nokia. GSMArena has done extensive shootout of 808 PureView VS Samsung Galaxy camera while DPReview has reviewed the PureView camera of Lumia 920.

Coming to 808 PureView vs Samsung Galaxy camera shootout first. Samsung has launched Galaxy Camera as a “connected camera” with Android as the running OS and as they have marketed it in a smart way, it has caught some attention. It boasts of impressive 21X zoom, OIS and other proper camera tidbits. So, how would 808 PureView will fare against this compact camera ?

Answer is as far as image quality and resolved detail goes the Samsung Galaxy Camera still has to do some catch up against “Oversampling” powers of 808 PureView. The above crop from similar daylight images throws some light on what we mean. Though you can first read the GSMArena’s conclusion below and then hit the link for reading more.

Anyway, the Nokia 808 PureView is the smartphone equivalent of a decades-old world record. A combination of genius, inspiration and hard work – and perhaps a bit of good luck – that’s just impossible to match even if all the ingredients are there. We don’t think anyone was surprised at the Nokia 808 PureView getting the better of another digicam.

Coming to second story of this article, Lumia 920’s PureView Camera gets reviewed by DPReview. As always they have done a very professional camera review here. They have also done a before Portico update/update Portico update comparison and confirm the improvement in sharpness of daylight pictures post “Portico” update. Read their conclusion below and hit the link for reading the full review.

The Nokia Lumia 920 sports a very capable camera. Thanks to its optical image stabilization, it can capture clear images at low shutter speeds that would elude any other phone on the market. This makes it an ace at low-light photography of stationary objects, and partially addresses the Achilles heel of every phone camera on the market except Nokia’s own 808: poor low light performance. OIS also helps with borderline shutter speeds that non-stabilized phones routinely use anyway. While they simply hope for the best, the 920 stands an excellent chance of delivering a sharp image.

Nokia Mobile teases a Nokia launch event on October 06. Here’s what to expect