The Nokia 808 PureView  won the award for the best new mobile handset at the at Mobile World Congress 2012 event. The pureview techonology was one of the biggest factors behind 808 getting this award at MWC.

Now in a major cheer for Nokia, Pureview technology  has also been awarded the Best Imaging Innovation  in the TIPA Awards 2012.The TIPA blue logo is recognised around the world and only products with the honour of having an award can display the logo. Hence 808 pureview is now worthy candidate to carry on this logo.

So 808 pureview fans (including me) rejoice!! 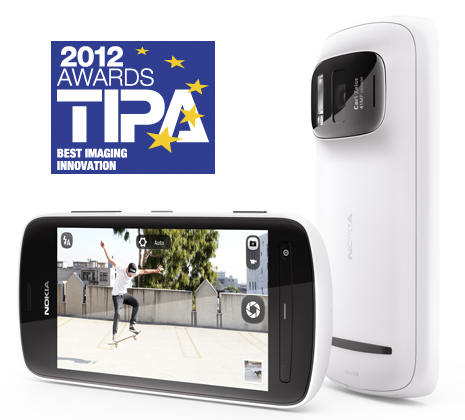 When asked as to what makes Nokia PureView worthy of this prestigious award, a spokesperson at TIPA said:

In the 808 PureView incarnation we appreciated the extra large sensor – by camera phone standards (1/1.2 inch) – with the huge 41MP resolution and the ingenious way this resolution is exploited (by oversampling) to supply lossless zooming. In this way Nokia has overcome one of the main drawbacks of camera phones, i.e. unsatisfactory performance with zoom.