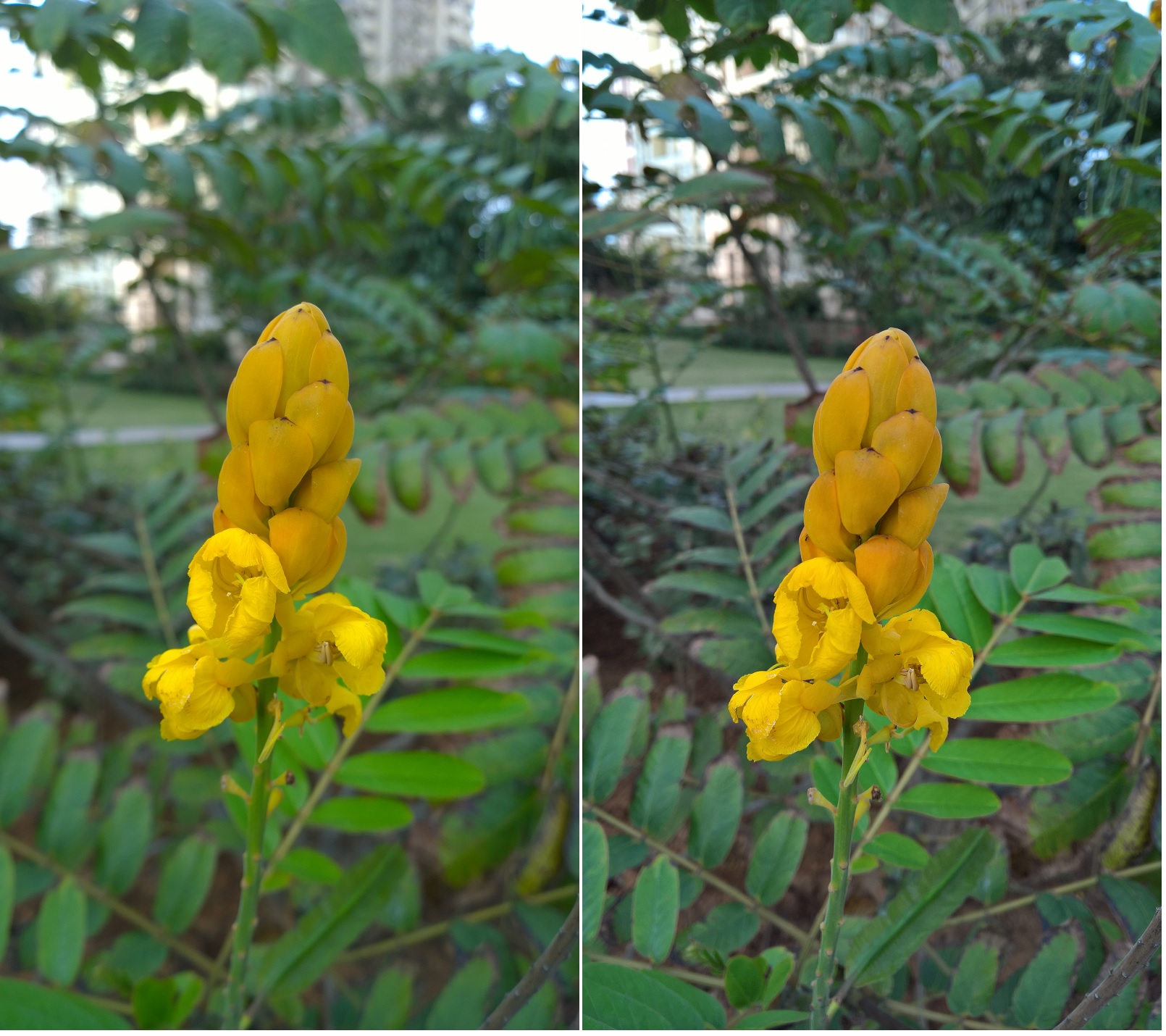 Microsoft’s latest flagships Lumia 950 and Lumia 950 XL pack 20 MP PureView cameras just like their predecessors Lumia 930 and Lumia 1520. The new camera module however packs some new capabilities like improved OIS, improved sensor design, 5th gen OIS, F/1.9 aperture camera, Natural Pixel processing, RGB Flash and can do ISO till 12800 now. It can also do two exposure times in the same image as the exciting new feature. Read about all the new features by clicking here.

In all the comparison sets, Lumia 1020 crop is on the top or to the left, followed by Lumia 950 XL image crop.

Lumia 950 and Lumia 950 XL cameras come the closest to Lumia 1020 camera in terms of image quality and capturing details than we have ever seen any other Lumia camera or even any other smartphone camera doing. In fact in any capturing conditions, Lumia 950 XL camera impresses a lot. It keeps colors vibrant yet more realistic than the Lumia 1020 camera and captures very good amount of details. The best part is lack of artificial sharpening or the introduction of the natural pixel-processing that keeps images natural. When we go to 200% crop level the difference in amount of details captured by both cameras become pronounced, yet it is really very respectable for a 20 MP camera to challenge the Lumia 1020’s 41 MP camera even at 200% crop. Lumia 950 is quite natural at capturing Bokeh Macro images just like Lumia 1020.

In low-light capturing conditions, Lumia 950 XL captures impressive images both with and without flash. But surprisingly in low-light without flash stills comparison Lumia 1020 beats it comfortably, even at 100% crop level and we feel that it should have been done better especially in this without flash capture. Though the Flash is probably the best you will find on any new smartphone camera and the RGB flash helps it capture natural-looking images in night again.

In a nutshell, when it comes to stills capture, Lumia 950 XL camera can easily replace your point and shoot cameras and it is certainly very potent camera in whatever lighting conditions, as the comparison with Lumia 1020 tells us.

Lumia 950 XL comes on top when we talk about video capturing. When we compare details captured by both cameras, they are really comparable. Lumia 950 XL camera however keeps subject more natural and colors more real. OIS works better on Lumia 950 XL and it is quite clear from the video samples. There is one area in which Microsoft can do some improvement however. Autofocus while capturing video on Lumia 950 XL is bit slow and can go ,when you move a bit faster.

Slow Motion capture and 4K are neat tricks in the Lumia 950 XL’s arsenal too. Above is a raw and unprocessed Luma 950 XL slow-motion video sample and one can really do better than us with right kind of tools and skill.