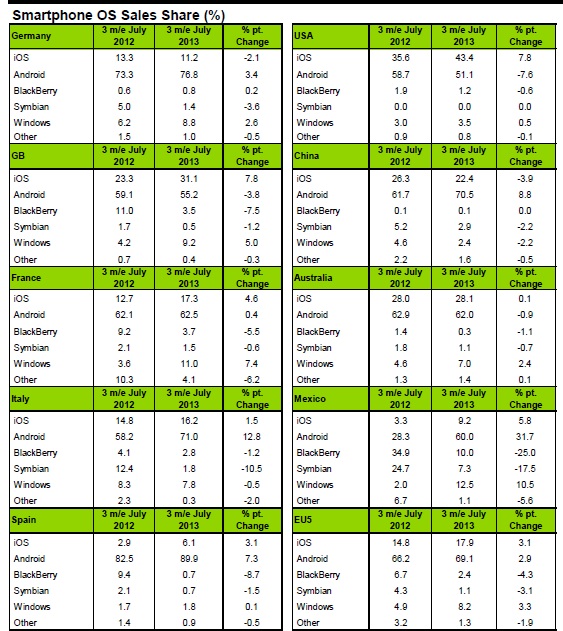 Latest KWP report for three months ending July shows WP share touching the highest percentage yet in many markets. In 5 major European markets, it has grown to 8.2% from 6.9% last month. In case of Australia the share has touched 7%. In Mexico the WP share has grown significantly to 12.5%. In UK it has 9.2% while in France 11% market share.

The latest smartphone sales data from Kantar Worldpanel ComTech, for the three months to July 2013, shows Windows Phone has posted its highest ever level of 8.2% across the five major European markets*, emerging as a key player in the smartphone race.

Dominic Sunnebo, strategic insight director at Kantar Worldpanel ComTech, comments: “Android and Apple take the lion’s share of the headlines and continue to dominate smartphone sales, so it’s easy to forget that there is a third operating system emerging as a real adversary. Windows Phone, driven largely by lower priced Nokia smartphones such as the Lumia 520, now represents around one in 10 smartphone sales in Britain, France, Germany and Mexico. For the first time the platform has claimed the number two spot in a major world market, taking 11.6% of sales in Mexico.”

Windows Phone’s growth isn’t coming from stealing Apple or Android consumers. Only 27% of Apple and Android users change their OS when they replace their handset, and those that do switch tend to move between the two big operating systems.

Dominic continues: “Windows Phone’s success has been in convincing first time smartphone buyers to choose one of its devices with 42% of sales over the past year coming from existing featurephone owners. This is a much higher proportion than Android and iOS. The Lumia 520 is hitting a sweet spot, offering the price and quality that new smartphone buyers are looking for.