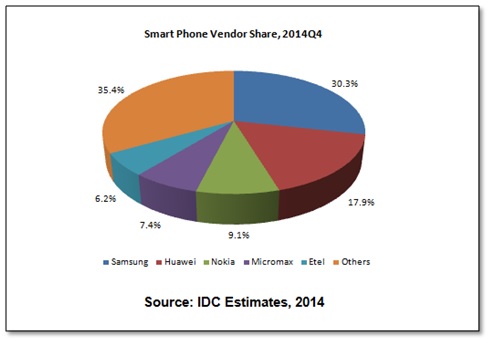 Nokia: Nokia stands third in smart phone market with close to 9% market share. Higher brand recall owing to their feature phone penetration continues to drive their business in the country. However, the brand might soon find itself competing closely with Indian vendors Micromax and Intex as they gear up to gain higher market share in the country.

Sri Lanka mobile phones market has seen a surge to touch 1million mark in Q4 2014 and 22% of the mobile phones contribution came from Smart Phones that are seeing rapid growth year-on-year at the expense of feature phones.

Sri Lanka mobile device market has observed a surge in sales in CY 2014. Noticeably, the smart phone business has been growing exponentially year-on-year and Q4 2014 was no exception.

Perhaps the challenge here for Microsoft is to convert as many Nokia feature phones users to its Lumia smartphones line as possible. We have seen it coming with exchange offers in India to achieve that.