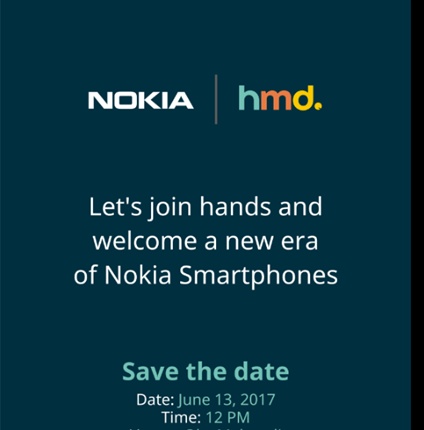 Back on 2nd June HMD Global, the team behind new Nokia phones sent out media launch invites for the new Nokia Android smartphones in India. The invite wanted us to be there on 13th June at 12PM. But it didn’t mention anything about new Nokia phones.

The first Nokia phone introduced by HMD Global in India was the New Nokia 3310 (2017) back on 18th May and it has been available since then. HMD has already acknowledged the huge demand of Nokia 3310 (2017) to us. We have also reported exclusively that the Nokia Android smartphones will be available in India in mid-June starting with the Nokia 3.

Now the company has sent out another press invite to us with special mention about Nokia phones launch in India. The new invite says, ” Let’s join hands and welcome a new era of Nokia smartphones”

Apart from this invite, the company also sent us out a physical invite with card. Opening the card gets you the famous Nokia Tune. You can check out this in the video embedded below,

So yes it is now officially confirmed that the new Nokia Android smartphones will be coming to India on 13th June. HMD Global will also announced the pricing and date of availability of Nokia 3, Nokia 5 and Nokia 6 on 13th June only at the event.