Skip to content
You are here
Home > Latest Posts > Windows Phone sees big growth in Argentina and Mexico according to “Statscounter”. 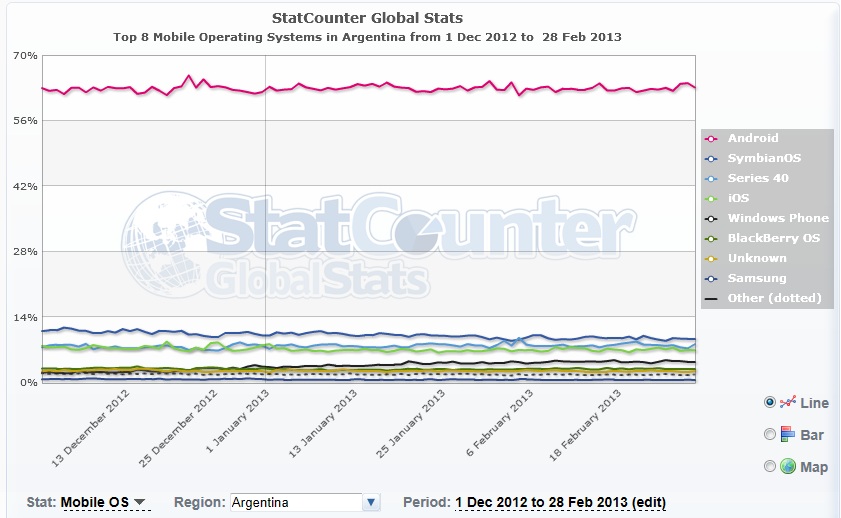 “Argentina” is one of the fastest growing smartphone market with smartphones making 42% of total phone sales. Android is the major OS with 60% installed base there. The outlook for 2013 indicates smartphone sales as a percentage of total phone sales to grow to as high as 54%. Now, a very encouraging trend has been captured by our blog regular “Dojobi” via Statscounter.

The Windows Phone “installed user base” has swollen to 4.85% on 3rd March from just 2.14% on 1st December 2012. This is huge jump as, we are talking about installed base and such a growth is possible only when a new OS has major device sales share in recent times. Lumia being the lead force behind WP OS and this jump seems due to Lumia 710 and 900 as these are the ony two Lumia devices Nokia sells in Argentina currently. With introduction of Lumia WP8 devices range Nokia can certainly boost the market share further in Argentina.

Not only Argentina but even  Mexico shows strong Windows Phone growth trend. In Mexico in the same period of Dec 12 to March 13 the growth is from 3% to 4.54%.

Slowly and steadily Windows Phone is looking up and emerging stronger !! Thanks Dojobi for the Tip.