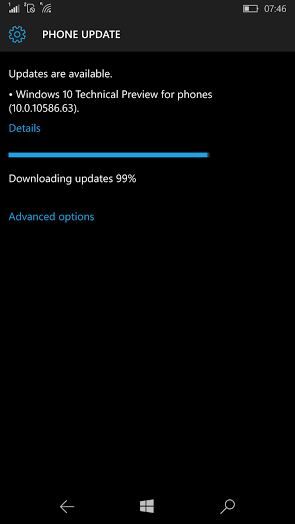 Microsoft has now pushed the Windows 10 Mobile Build 10586.63 to Windows Insiders in Fast Ring. It seems Microsoft paused this build due to some server issues late in night and then resumed and we can confirm that our devices are already installing this update. In case you are facing any issue in upgrading to this build you may like to refer to our guide on most commonly known Windows 10 Mobile upgrade, installation and usability issues.

To the question of what the build brings in terms of changes, there is not much to report as in case of last two cumulative updates. There are no noticeable changes but as per a Microsoft employee on Reddit, these are the fixes and improvements that comes with this update.

We first reported about the latest cumulative update Build 10586.63 from BuildFeed. We also reported about possibility of this being the build that will be available to Windows Phone 8.1 users as the upgrade build, when they upgrade to Windows 10 Mobile soon.