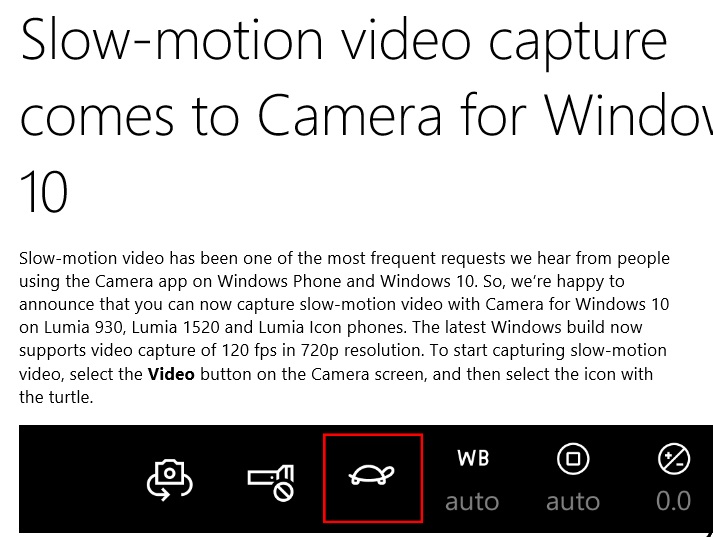 Microsoft has just announced a cool feature for Windows 10 Camera. Insider Hub has announcement about the Slow Motion capture coming finally to Windows 10. This has been a much-demanded imaging feature missing from Windows Phone and Windows 10 Mobile. Though the feature will be available on Lumia 930, Icon and 1520 only and of course on new devices like Lumia 950 and Lumia 950 XL.

Slow-motion video has been one of the most frequent requests we hear from people using the Camera app on Windows Phone and Windows 10. So, we’re happy to announce that you can now capture slow-motion video with Camera for Windows 10 on Lumia 930, Lumia 1520 and Lumia Icon phones. The latest Windows build now supports video capture of 120 fps in 720p resolution. To start capturing slow-motion video, select the Video button on the Camera screen, and then select the icon with the turtle.

To adjust your clips, select Edit slow motion when viewing the video in the Photos app. Trim your videos and play some parts back in normal speed and other parts in slow motion. Select Super slow to dramatically highlight a specific part of the video.