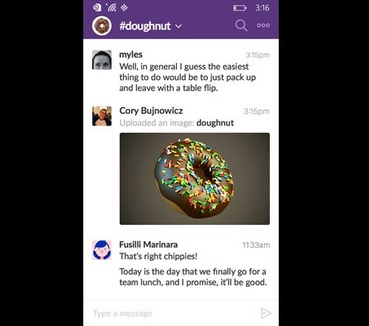 Slack (Beta) has received a new update for Windows phone Devices. The new version is 2015.1002.0.0. The latest update brings auto-complete for user mentions, channel mentions, other additions and improvements.

WHAT’S FIXED
Fixed an issue where users were not prompted to join an existing team if they didn’t have an account yet
Fixed an issue where activating two factor authentication made signing back in difficult
Fixed an issue where new messages from closed direct messages might not be added to the channel list properly
Fixed an issue where attachments did not always display action links
Fixed more things
Minor UI enhancements
WHAT’S NEW
Auto-complete for @ user mentions, channel mentions and emoji
Added copy message text option to message context menu (shows dialog where you can directly select text).
In case you’re wondering why it works this way: 1) Windows Phone doesn’t let us directly add text to the clipboard and 2) because of how messages are displayed with formatting, direct text selection is not possible. The popup displays unformatted text which can be directly selected & copied.
KNOWN ISSUES
Messages cannot be sent while disconnected. In the future we plan to have better handling for queueing messages sent, but for now the send button should be disabled when there isn’t a connection available.
Note: A few people have seen messages get sent multiple times if there are connectivity issues.
TO DO LIST
Performance improvements – it can always be better
Slash commands with auto-complete
Animated gifts – We love them, but unfortunately support is lacking in the Windows Phone image control. We’re working on a solution. ?
Adding reactions & a fancy emoji picker
Starring and viewing starred items
Commenting on files
Search
Mulit-team support
Offline support
Channel Info pane
More integration with Windows Phone specific features