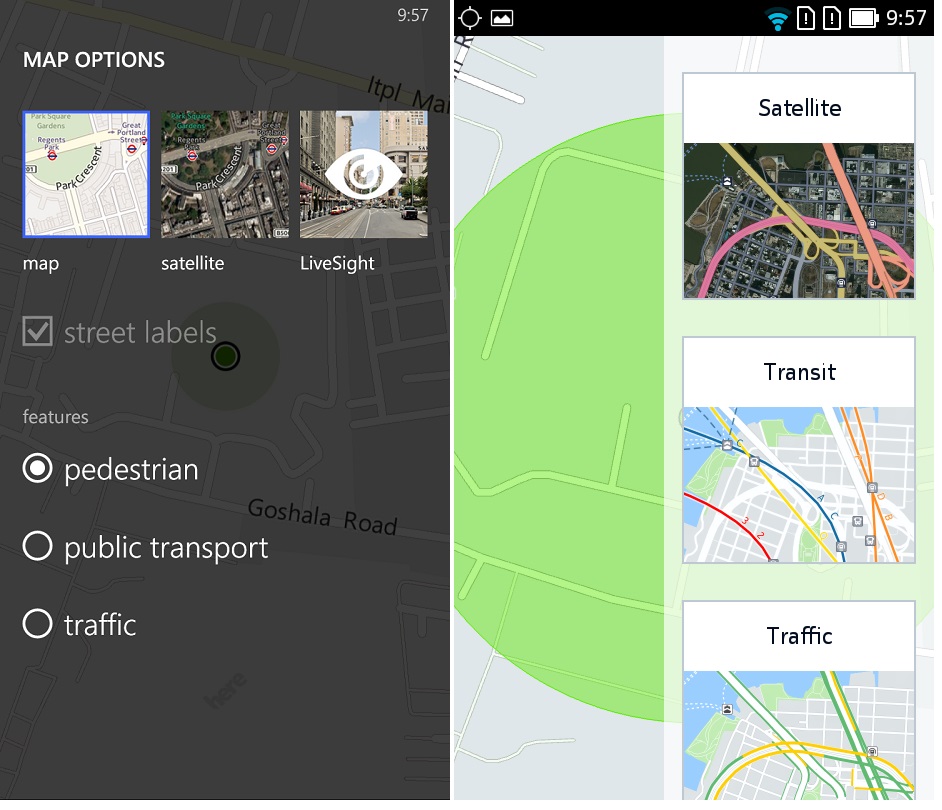 You may have read our HERE Maps vs Google Maps for Android shootout earlier. Now we compare HERE Maps app and navigation on Android and Windows Phone and try to find out the pros and cons, both have over each other.

Windows Phone app locks slightly faster, though the difference is not highly noticeable and can be attributed to Beta status of the HERE for Android. Maps UI of HERE for Android has one more icon (directions) and search bar available in the front while HERE for Windows Phone has nothing on top of the Maps display. Both have their own advantages, easier access vs better maps visibility.

HERE for Windows Phone has richer map display options including Livesight (AR) option, which is still missing from HERE for Android.

HERE for Android and HERE for Windows Phone both support full offline navigation capability. you can download cities, countries and even continents and use them offline without incurring data charges. What is good about HERE for Android though is that you can actually set the app to offline, something which many of us may have seen on our Symbian devices and this may be actually required because there is no separate drive app in HERE for Android. In HERE for Windows Phone, you can do the same, when you use HERE Drive+.

Navigation quality wise both are on par, naturally, as it is the same HERE Location cloud powering both. Here again, there are differences in navigation menus. What is common though that you slide up to reveal more option settings in both.

There are similar options to customize your Drive view in both the apps, though HERE for Windows Phone is richer in handling POIs display across the route. You can actually choose what you want to view while driving.

Both differ though when it comes to handling “alternate routes”. In case of HERE for Android, you have to tap on Alternate routes which appears as a separate option, while in case of Windows Phone you have option to chose between Faster, shorter and balanced routes. Both offer options of optimizing routes like avoiding Toll Roads, unpaved roads etc.

HERE for Windows Phone has more features like Livesight support, feels more polished, packs better POI availability and control over what POIs you want to be displayed and faster POI search etc. HERE for Android doesn’t feel like lacking much though and is a highly commendable “Beta” app. To be honest, I really like options like putting the whole app offline, availability of directions icon on maps menu and alternate routes being easier to access.