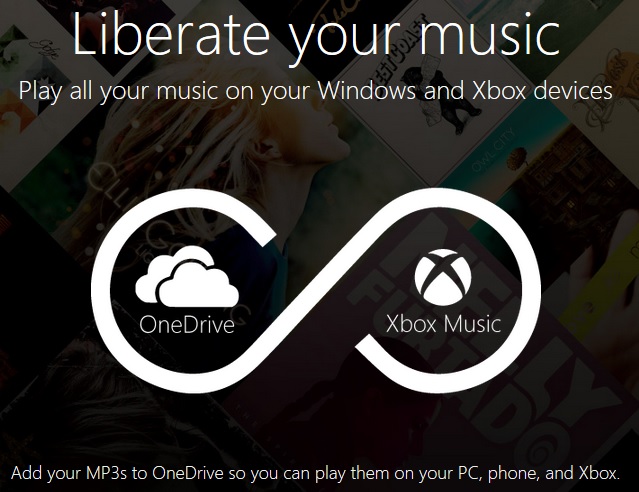 Microsoft has made OneDrive to Xbox Music integration live now. So, you can now add music to the new “Music” folder on OneDrive now and it will start appearing in your collection on music.xbox.com and in the Xbox Music apps for Windows 8.1, Windows Phone 8.1, Xbox 360, and Xbox One.

We’re happy to announce that Xbox Music has integrated with OneDrive to allow access to your entire personal music collection from your Xbox Music application for free!  As of today, any music files that you upload to your new “Music” folder in OneDrive will start to show up in your collection on music.xbox.com and in the Xbox Music apps for Windows 8.1, Windows Phone 8.1, Xbox 360, and Xbox One – no Music Pass required!  If you do have a Xbox Music Pass, you even get an extra 100GB of storage on your OneDrive!

Who can add their music to OneDrive?
Anyone with a Microsoft account in select regions* can add music to OneDrive and play it on Xbox Music. To use this feature, make sure you’ve accepted the Xbox Terms of Use by signing in to xbox.com

How do I add my music to OneDrive?
The easiest way to upload is with the OneDrive app. Just add your favorite files to your Music folder, and they’ll appear in your Xbox Music Collection shortly after.

What file formats are supported?
You can add music files in MP3, M4A (AAC), and WMA formats.

Which devices can I use to playback OneDrive content?
You can play OneDrive music on the following devices:

Windows 8.1 computer or tablet
Windows Phone 8.1 (using the Music app)
Xbox One or Xbox 360 console
Through a web browser on the Xbox Music website

This OneDrive functionality is not available on Windows 8. You’ll have to upgrade to Windows 8.1 to get the latest version of the Music app from the Store.
iOS and Android devices are not supported. If you have an Xbox Music Pass and use iOS or Android, OneDrive content will not show up. (This won’t interfere with playing music through your other devices).

Will I get extra storage space to save my music to OneDrive?
If you are a Music Pass subscriber, you’ll get 100 GB of additional storage in OneDrive to save all the music you love.

Is there a limit to the number of files that will surface in my collection?
You can currently add up to 50,000 songs to your collection.

How can I see OneDrive content on my Windows Phone?
Make sure you’ve accepted the Xbox Terms of Use by signing in to xbox.com, then open the Music app on your Windows Phone. Your OneDrive songs should be listed in your collection shortly after.