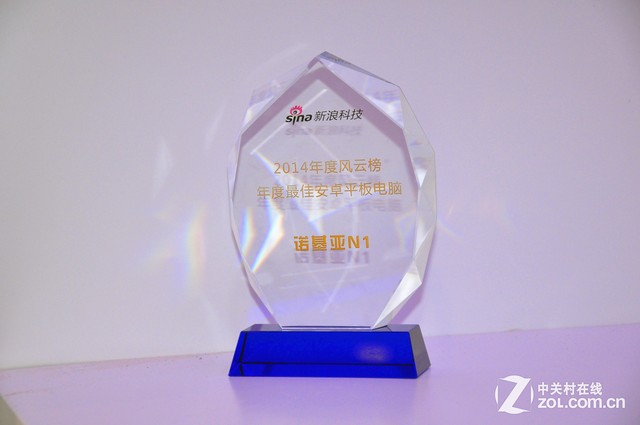 Not only Nokia N1 is raking in some good sales (all the four batches sold out) but getting some recognition for its quality too, it seems. The tablet has been granted the award for “Best Android Tablet” at Sina Technology 2014 Annual Billboard event held on 8th February in China. Seems, there were Nine Tablets in the final round of contest and Nokia N1 emerged as the winner.

Nokia N1 in nine finalists Android tablet out off the lead, won the 2014 Best Android Tablet PC honors. The annual contest since December 29, 2014 was officially launched, the selection will use online voting and expert assessment approach 50-50, selected in 2014 most users respected man of science and technology, the most talked about business and outstanding high-quality end products.

It is great to see the first product of new Nokia’s design and craftsmanship (both hardware & software) getting some recognition in the world of Android. Many have been waiting for true Nokia-Android effort and seems the Nokia N1 story so far has all the makings of a great start!!

Nokia N1 can be simply termed as the best 8-inch Tablet out there with its unbeatable price (USD 257), best-in-class Benchmark performance, beautiful design and features, it packs. Read our Nokia N1 vs iPad Mini vs Jolla Tablet vs Nexus 9 comparison to get a good idea about how Nokia N1 compares to  heavyweights iPad Mini and Nexus 9 Tablet in terms of key specs and features. You can also read its camera details and watch sample image by clicking here.

We have all the specs and features listed at our dedicated Nokia N1 product page.