Skip to content
You are here
Home > Latest Posts > Next phase of PureView to rival “DSLR Quality” in all conditions. Is (Oversampling+OIS) being hinted? 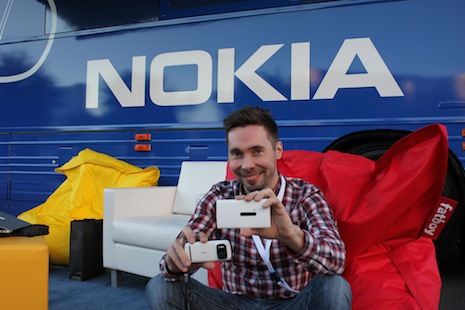 Though it must be dream of every “PureView” fan, but Nokia has never claimed or denied that they will combine both the PureView techs from 808 and Lumia 920 in one and bring into one device. Now, in an interview with Nokia conversations, Juha Alakarhu, head of imaging technologies at Nokia has hinted that after solving problems of zooming an sharpness with 808 PureView and Low light problem with Lumia 920 PureView, the next problem  they are focused on addressing is that  “You should be able to give your phone to a 3-year old and still capture amazing photos, like with a big DSLR camera” and that too with super ease and every single time.

Asked if there’s one major problem he would like to solve in the years ahead, Juha takes his time before answering. “I’d love to make it super easy to get great photos every single time,” he tells us. “You should be able to give your phone to a 3-year old and still capture amazing photos, like with a big DSLR camera.

Now, we know that 808 PureView’s imaging quality has been applauded a lot and amny reviewers like GSMArena opine that it performs equally good in comparison to DSLRs in especially daylight conditions. Lumia 920 is a champ in low-light conditions and certainly rivals DSLRs low light imaging also the ease of use by even shaky hands is there due to OIS.

So, If we combine Oversampling and OIS together,

So PureView 1 +PureView 2 is certainly a strong candidate considering the fact that it fits  “Super easy, DSLR quality imaging under anay condition” criteria. But, you never know :P.  Nokia may come up with something totally different as well as !!