Skip to content
You are here
Home > Latest Posts > Opinions > Microsoft barely manages to maintain Windows Phone Installed Base in US. 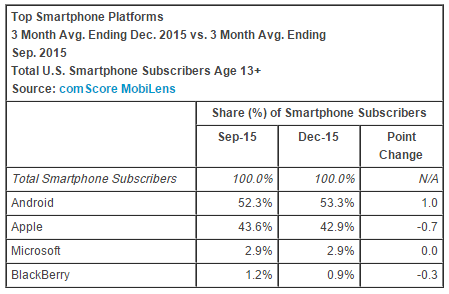 ComScore Inc, a company known for best market trend analysis & data analysis in the market has now published their report on MobiLens & Mobile Matrix fort key trends in the US market in December 2015. The report of MobiLens & Mobile Matrix is always related to mobile phones , Operating Systems used and top apps installed in mobile phones. If we take a look at the OEM score overall,Apple was ranked to be the number one manufacturer with 42.9& of market share in the USA while Samsung was on the second place with 28.4% of total market share of USA. Now if we talk about mobile OS, it was Google’s Android which was on top with 53.3% of total platform share. Apple was on the second place in OS market share with a total share of 42.9% . Microsoft Windows came on second with only 2.9% of market share.Blackberry OS was on 4th place with only 0.9 % of market share.

Microsoft Windows was having 2.9% back in September 2015 & even in December 2015, it was having the same percentage.which makes us believe that Microsoft barely manages to maintain the 2.9% of user base in the USA which is home country for the company as well as the OS. Many new features like Cortana are made available in USA first. So it is worth noting that Microsoft is getting loss in Windows phone market share in worldwide as well as US. We have previously seen in Kantar report that Windows Phone slides everywhere but grows in UK & China.  Microsoft is already busy making an update of  Windows 10  available to Windows Phone 8.1 devices but current version doesn’t seem to be that much great to go out as final Windows 10 build. Microsoft CEO was also worried about the share of Windows Phone in the market. He said Windows Phone market share is unsustainable, but Microsoft is committed to Windows Phone & Lumia devices.