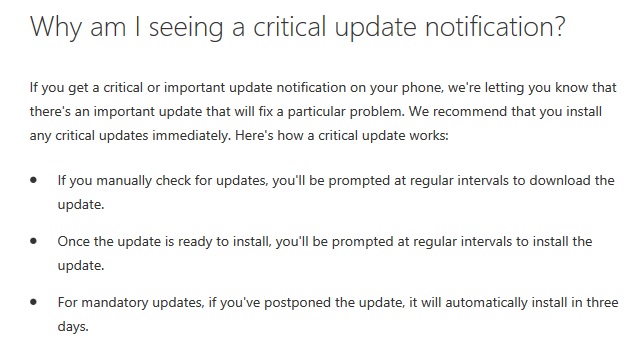 We have been receiving many tips since morning about a possible Windows Phone 8.1 GDR2 roll-out to many Lumia devices. But on checking it seems it is rather a “critical update” that is hitting many of the Lumia devices today. The update seemingly fixes a restart issue that has been making some  devices reboot periodically.

You may be seeing a critical or important update notification for the following reason:

We identified a problem in some versions of Windows Phone 8.1 that could cause a phone to restart periodically. A critical update will fix this problem. If you’re unable to install the update or want to learn more, we can help you fix your phone.

Though, if you are in Europe then your Lumia 735 and Lumia 830 may see a GDR2 roll-out too. As per the latest info Lumia 930, Lumia 830, Lumia 730 and more devices are receiving critical update.

Thanks Suresh and others for the tips. Cheers!!