After becoming the best selling device in Finland for February , Lumia 800 is topping the charts at all major Finnish operators for the month of March too. Good news is that Lumia 710 has also joined the party, and ranks within top ten across all the operators’s best selling lists.

First Elisa, the largest operator in Finland. Nokia Lumia 800 is topping the charts in March 2012 beating the likes of iPhone 4S, Galaxy SII. Also great to see Lumia 710 at no. 3 in the best-selling device list.

DNA, the other major operator has reported that Lumia 800 is second on the best-selling list. Lumia 710 is also at no. 9 in the top ten devices.

Third largest operator in Finland, Sonera reports that Lumia 800 is the no. 1 best-selling device and it is great to note that Lumia 710 is at no. 3 in the list. 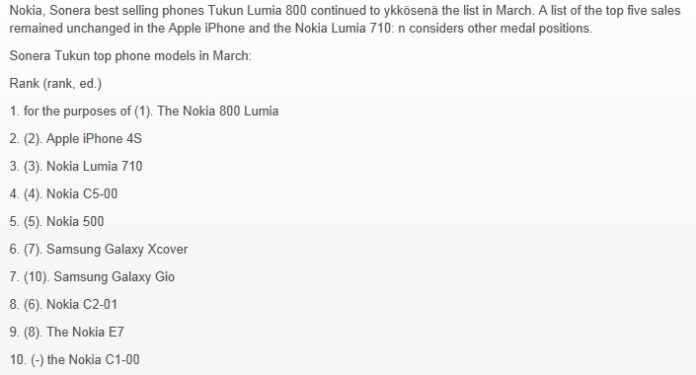