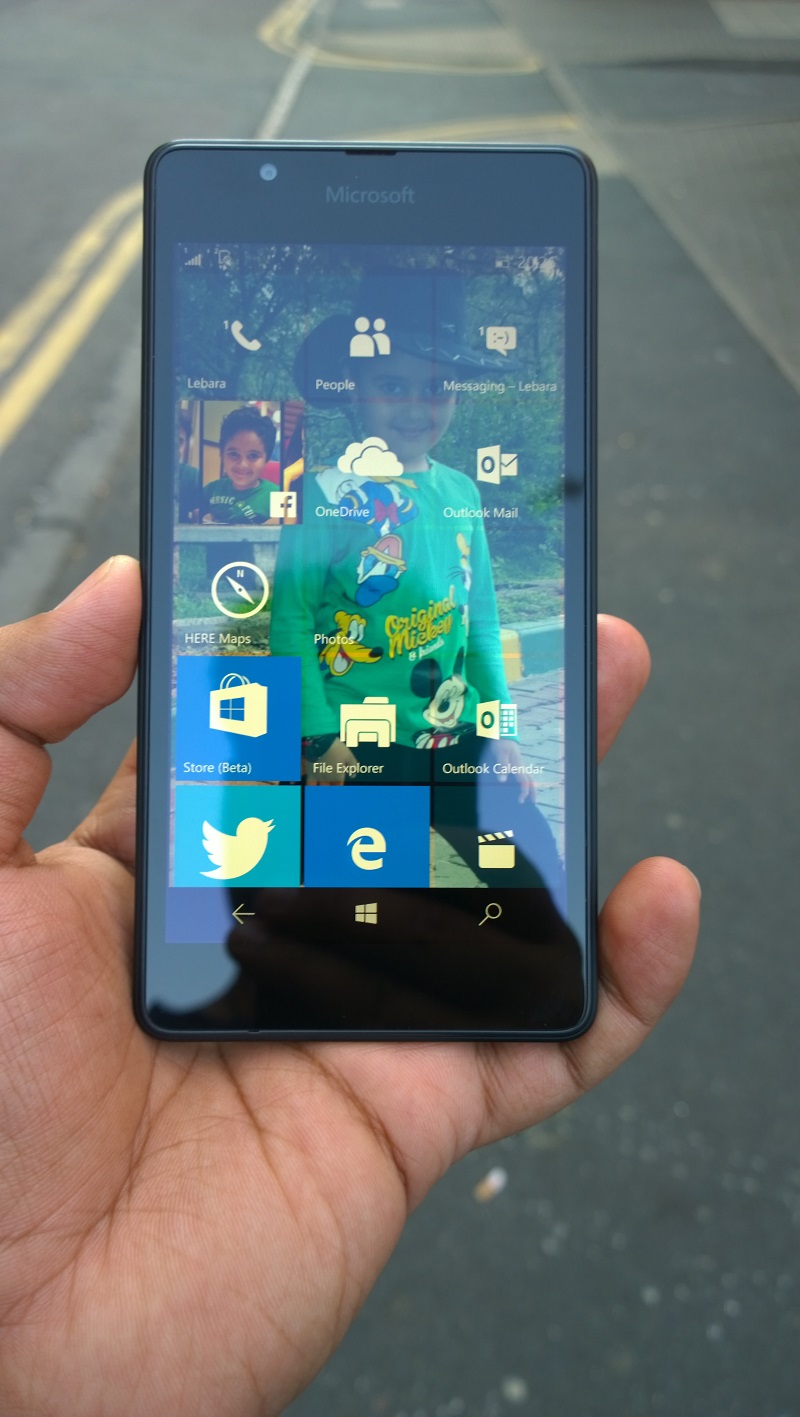 Lumia 540 is perhaps one of the most well-packaged Lumia device ever for its price range!! With its 720P display, 8 MP rear camera and 5 MP FFC, it offers unique benefits over its brethren and device offerings from the competition. Keeping in mind the interest generated by Lumia 540, we have really subjected it to our one of the most extensive coverages. We review the Lumia 540 based on more than three month usage of the device as our daily driver, per NPU’s tradition. Bonus is that we will share hands-on videos of Lumia 540 running Windows 10 Mobile preview with ease.

Design wise, it may not be one of the most beautiful Lumia devices ever created, but is certainly a looker and looks more premium than the price-range it belongs to. You may or may not agree but it looks slightly better than both Lumia 640 and Lumia 640 XL with its more squarish design and slightly tapered edges. It is light, thin and very good in one-handed use, while offering a good grip due to its body material and the design of back and edges.

Watch our unboxing and hands-on video of Lumia 540 in which we talk about Lumia 540’s design.

Lumia 540 has a 720p 5-inch IPS LCD display. With help of Nokia’s CBD tech, it exhibits deep Black levels and very good outdoor readability. One more thing that I really liked about the display is the Finger-prints resistant coating that makes the display free from finger-prints and makes it very easy to clean.

The Lumia 540 comes pre-loaded with Lumia Denim and Windows Phone 8.1 GDR2 update and runs on Snapdragon 200 quad-core processor with Adreno 305 GPU. The CPU /GPU combo is one, which has come for some criticism, but honestly the device is one of smoothest and responsive smartphones, you will ever use. It has been rock solid as my daily driver and I have never seen it freezing or restarting even once during my long usage period. Below we share our impressions of the device with GDR2 installed then compare it to Lumia 640 XL and finally you can watch Lumia 540 running latest Windows 10 Mobile preview.

In this video we have demoed the changes that Windows Phone 8.1 GDR2 brings and also share our impressions of general usability and performance of Lumia 540. Lumia 540 is the first Lumia with a 720p display and is running Snapdragon 200 quad-core processor, so one can be bit skeptical about how the processor will handle the UI navigation. But you will be impressed with the way the device handles daily operations. It runs smoothly and proves its usability in daily one-handed use.

In this video we compare Lumia 540 and Lumia 640 XL in terms of general  performance, multitasking, browsing, video streaming & more. Coming to why of this comparison, we understand these two devices are quite different, but still being asked by many about which one they should opt for, we thought of comparing them head-on. If you think with Snapdragon 400 processor Lumia 640 XL can score an easy win over Lumia 540 that runs on Snapdragon 200, then think again. Lumia 540 gives neck and neck fight to Lumia 640 XL.

One of the most desirable Lumias, the Lumia 540 packs a 8 MP rear camera with 1/4 inch sensor and F/2.2 aperture. The same unit does its duty on Lumia 640 too. While the camera on Lumia 540 doesn’t pack Zeiss optics or OIS like on some “PureView” or non-pureview Lumia cameras, it is expected to provide a good imaging performance being a Lumia.

So, we subjected it to our detailed Daylight and Low-light testing and also benchmark it against Lumia 1020, the gold standard in smartphone imaging. Here is what we concluded for stills,

In daylight capturing conditions, Lumia 540 camera impresses. It keeps colors natural and captures good amount of details. Though as you can see in above comparison with Lumia 1020, it does have its own limitations because of tiny sensor but unless you are an imaging enthusiast, it should work fine for you. It also does pretty well in capturing macros with good amount of details and true colors.

In low-light capturing conditions, due to its F/2.2 aperture and Lumia camera’s algorithms, Lumia 540 does well, even in almost dark conditions without flash. More the light merrier the result though!! While it is no match to OIS equipped Lumia 1020, it does capture more light than any competitor camera in its price range. The LED flash works well for nearby objects and we have included many samples for you.

In a nutshell, when it comes to stills capture, Lumia 540 can be trusted as a daily camera, though for enthusiasts, “PureView” is the way!!

Coming to video capture, it doesn’t impress that much,

Lumia 540 camera starts showing its limitations when it comes to video capture. Not only because of lack of OIS, but also because it runs on Snapdragon 200 processor and video capture is thus limited to 848×480 resolution. So, your only chance to get a decent video recording with Lumia 540 is when you keep you hands super steady and don’t move. The 480p resolution video is not that bad when it comes to capturing details and keeping colors natural, unless you are not moving.

You can read our full detailed Lumia 540 camera review by clicking here.

The 5 MP FFC on Lumia 540 is the same unit that does its job on Lumia 640 XL and Lumia 730 and it is every bit as good when it comes to capturing selfies. Though it can’t record higher than 480p videos it is every bit a great Selfie smartphone. Check a sample picture captured with the front camera below.

It runs on a Snapdragon 200 quad-core processor comes with a 720p display and is the first Lumia device to do so. Because of the loud audio output and good display, gaming on Lumia 540 is enjoyable. So while a better display may make gaming more enjoyable, will the processor and GPU live up to the task? We put it to test by playing “Asphalt 8 and Lara Croft: Relic Run” on the Lumia 540.

It doesn’t get hot easily and offers hours of non-stop gaming. GDR2 is really a well sorted out OS and the Snapdragon 200 + Adreno 305 combo on Lumia 540 doesn’t disappoint. Check the video for more.

In this video we test the display (video watching) and audio quality of Lumia 540. It impresses in both video output and audio output quality. It has good speakers and volume is loud but pales in comparison to some other available Lumias. But taking its price range in consideration it does a good job. You are best judge however. So, go ahead and watch the demo.

Lumia 540 has very good battery life (with GDR2) and I have been getting around 32-34 hrs of battery life with heavy “blogger” usage of the device which involves lots of browsing, apps testing and daily chores. Consider it around 36 hrs for a moderate to heavy use and that is really very impressive.

Though for better battery life you may like to give our earlier posted tutorial a try. Lumia 540 offers stellar call quality (both over 2G and 3G) and the reception is usually very good. I didn’t face any issue like call drops etc and it holds well even during long conversations.

Worth a mention are the features like double tap to wake up and double tap to lock the screen. It is very durable too and we have dropped it more than couple of times and it has survived the falls.

For such pricing, nothing comes closer to Lumia 540 as a package. It is a great daily driver with smooth performance, good rear / Front camera, very good display,  satisfactory gaming, top class audio and video output quality. During the course of my use of Lumia 540 as the daily driver for more than 3 months now, I have never felt the need of another or better device, when it comes to handling daily smartphone chores like calling, socializing, messaging, gaming and for that reason, even while using it as the only camera for point and shoot stills.

It handles the upcoming upgrade of Windows 10 Mobile very well and thus is future-proof. We recommend the Lumia 540 wholeheartedly. It is the true low-end Lumia flagship device and it can pleasantly surprise you with goodies it packs.