Skip to content
You are here
Home > Latest Posts > Joe to rumor-mongering media: “Get a life”, I am in Finland to work on building “great” phones!! 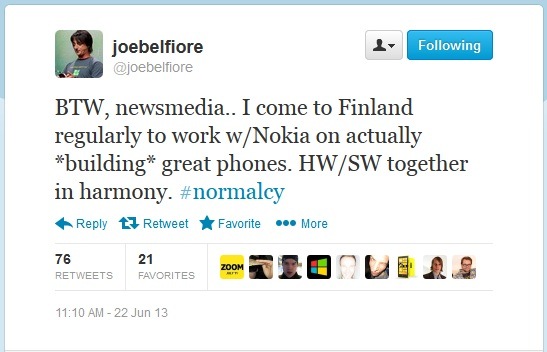 Seems, someone else is also sick of baseless rumor-mongering. We opined it already in our POV article.

Now, Joe Belfiore from MS, who is in Finland has been the recent target of rumor-mongers with some even suggesting that he is there to finalize the Nokia buyout deal. But, seems he had enough of this nonsense and has replied to “News media” in a tweet saying, he comes to Finland regularly to work with Nokia on building “Great Phones” and to ensure harmony of Hardware and software.

BTW, newsmedia.. I come to Finland regularly to work w/Nokia on actually *building* great phones. HW/SW together in harmony. #normalcy

While, for last 2-3 months, Nokia and MS have been working really very closely as can be seen in advertisements from MS highlighting hardware features of Lumia range and MS’s executives admitting that they consider Lumias as their own.

May be such kind of proximity has given fodder to rumor-mongers. But, anyways as Joe mentions may be now this clarification brings some #normalcy in lives of crazily excited few.