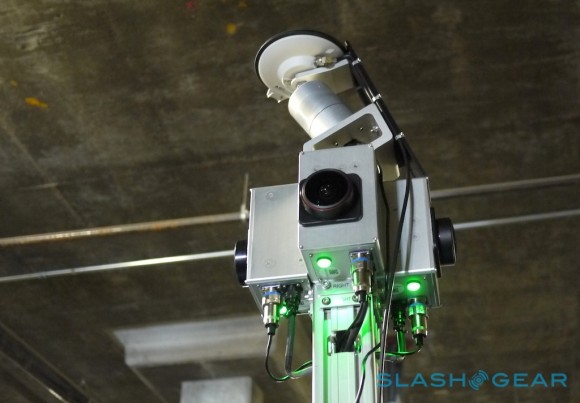 Using the second-generation version of  Earthmine’s (A company Nokia acquired) mobile mapping system, Nokia may be giving sleepless night to Google. The mapping system has an array of four cameras with super-wide-angle lenses that are mounted on the top of cars and sent to roam the streets. In 2nd gen system these cameras have more than doubled their resolution, with each of the four now capturing at 16.8-megapixels for a total panorama of almost 68-megapixels of data. By using the Earthmine fish-eye lenses, those four cameras can effectively record everything from the street level up to the sky, and a full 360-degrees surrounding the car. A complete image is captured every six meters the car moves. Slashgear team has accompanied Here team in such a car and opine,

Nokia may have come late to the game with Streetview-style 3D photography in its HERE Maps service, but the company is aiming to overtake Google with its second generation of mapping cars. Built using newly developed camera, LIDAR, and processing technology from 3D specialist Earthmine, which Nokia acquired last November, the updated system promises higher-resolution panoramic imagery than Google, as well as more accurate 3D buildings and sign recognition. SlashGear went out on the road in one of the prototype cars with Earthmine founder John Ristevski, to find out why Nokia’s 68-megapixel mobile mapping system should be giving the Google Maps team sleepless nights.

There is a video as well of such a car,

This is really amazing to see the level of dedication that Here mapping team possesses and this helps them in keeping the quality and features much better than closest competitor Google. Offline maps, global coverage, aerial imaging, overall data quality and now seems in even 3D streetview-style mapping Here Maps will be superior to Google Maps very soon.