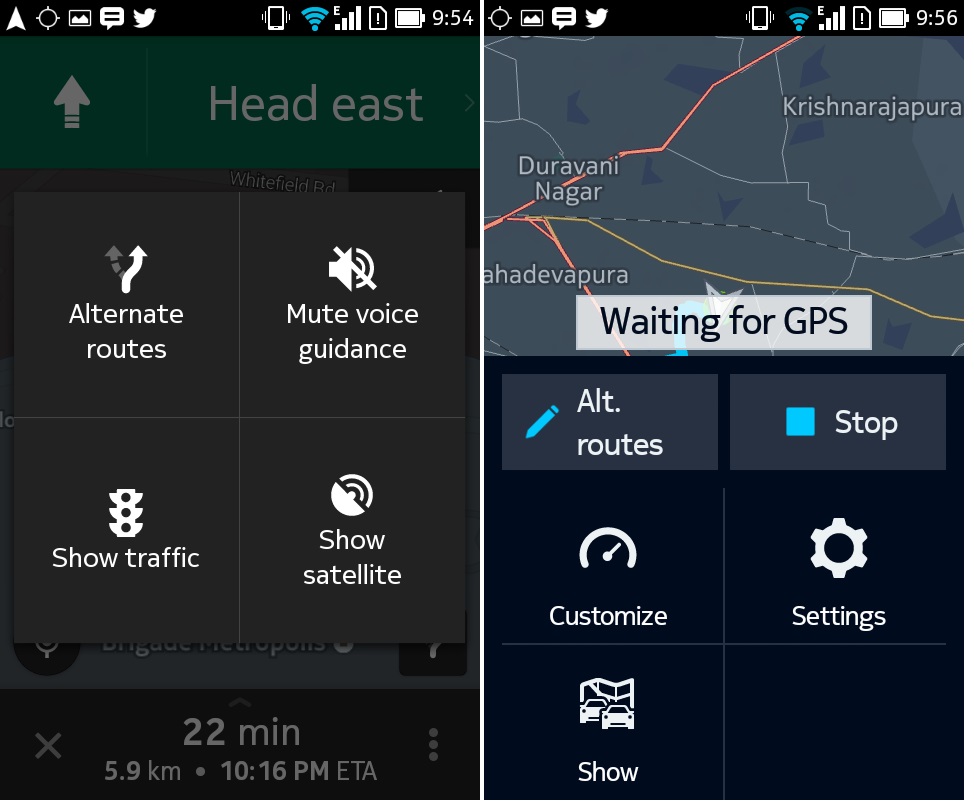 Google Maps has been the primary location and navigation app on Android devices, thanks in part to Google’s agreement with Android vendors, making it must have on their devices, but in part also because of lack of compelling alternatives. That’s going to change with HERE bringing its fully-featured Map and navigation app to Samsung Galaxy devices exclusively in October and to all Android devices by end of the year.

The HERE Beta for Android though leaked out days ago and we could take it for a spin and for a shootout with Google Maps for Android. The shootout includes comparison between GPS lock time, UI, features, Navigation quality and more between the two apps.

Both apps were able to lock GPS in nearly similar time and were found to be really quick!! Coming to the maps UI, Google features my location on bottom right while HERE on bottom left. HERE has more UI elements on the mapping screen though and one can access “map display types” separately on HERE from bottom right. In case of Google you need to access full menu from left for changing map display. HERE also has collection on top right which Google again doesn’t have on Maps menu.

With Google you will be offered to download currently displayed or used maps for offline use, but with HERE you can download cities, countries and even continents and use them offline without incurring data charges. As you can see in the below screenshot, with HERE you have the option of both downloading the maps and as well as use the app offline.

HERE has a big advantage over Google Maps in offline department.

From my current location to same destination on both Google and HERE drive, HERE provides a faster route with 16 min driving time. Google’s route will take 22 min in comparison.

Coming to Navigation UI and features, both look quite different. Google has voice navigation and also writes directions like “Head East” too while navigating. HERE doesn’t display “directions” while navigating but announces them and even can announce street names if you download voice navigation guidance with street names. HERE Drive though has features like speed-limit warnings which can be a life-saver in case of traffic violations, I didn’t find this option on Google Drive.

Also, with HERE you can navigate offline from any point to another, provided you have downloaded maps of that region in advance, without worrying about data charges. Google Maps provides offline navigation only when you have downloaded both source and destination maps separately and that looks like a less than half-balked solution, because you still need to start navigation while being connected and can only go offline later.

When it comes to comparisons, we know our readers trust us, as keep it free from biases. So, between Google and HERE Android apps, we see enough advantages with HERE to choose a clear winner here. HERE has richer Maps UI, unbeatable offline capability (Maps and Navigation) and when it comes to online navigation it offers better routes. This all when it is still in Beta. HERE team deserves  to be praised for perhaps the best Maps and navigation app on Android now.