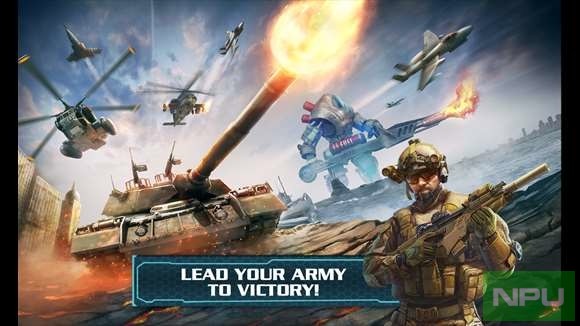 World at Arms – Wage war for your nation!, a Gameloft most Strategic game has been updated in Windows phone store. This update seems to be major one and brings some new game content. The updates takes the game version to 3.0.0.0.

In this game, you have to fight with your enemy across the globe, in the sea’s depths, on the ground, and in the air.

World at Arms – Wage war for your nation!

• A free war simulation game with brilliant graphics, stunning animations, and realistic units & buildings.
• Collect resources, build, upgrade, and fuse units, construct facilities, and complete numerous achievements to earn free bonuses.
• Engage in innovative battles across the globe and on various terrains (desert, urban, underwater & more).
• Immerse yourself in the only modern-war strategy game on the market that offers deep-sea exploration and battles!
• Construct the new super unit, Atlas, and use it as a game-changer in battle!
• Join Factions with other players or form your own to wage war, dominate, and win rewards.

This update is major one and bring new feature in game. Below is full change log.

What’s new in latest update
• Establish a new base along with your faction
• Clears the fog of war, conquest of the strategic points and collect a new resource for the factions
• Construct and upgrade buildings for the factions
• Protect your command centre with defensive turrets
• Make inroads into the enemy base with the new upgrades and units of the factions
• Unleashes the gigantic jötunn to annihilate the most hostile defenses
• Plunders the improvements of the enemy faction and use them to improve your PvP units
• The first 6 units increases the power of Prometheus and Atlas
• Bonus divers that affect the production of thorium
• The PvP system “knife, gun and grenade” has been replaced by improvements and equipment
• The power and the cost of PvP unit has been modified on the basis of “improvements and equipment system”
• Factions menu, Army Array and easy to use
• The military council and military structures will increase the attack and defense in the wars between factions
• New awards in the Global Conquest: boss units on level 3 of union

If you are fan of action and strategic game then you must add this game to your collection. Download it from below.