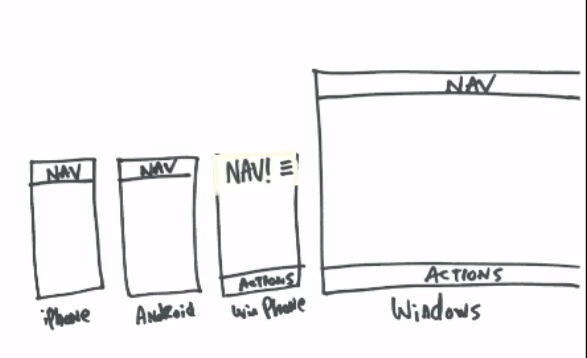 Android apps support on Windows Phones and Hamburger menus: These two have been discussed and ridiculed a lot by hard-core Windows Phone fans. But if a recent AMA of a ex-Microsoft design lead and now a Twitter employee has to be taken into account both are here to stay or Windows 10 for Phones design is exactly moving towards accommodating both these ideas. The person in question was design lead for the new version of Office. About android apps on Windows 10 for phones, he says,

He has posted a video about why Microsoft now has the navigation bar on the top (Spartan) and action buttons on the bottom and he has also talked about many (controversial) Windows Phones design decisions Microsoft has taken in last few years.

Ah yes, the hamburger. So. I’ve written so much about this (and even made videos) that I’ll do my best to summarize.

Windows Phone’s original interaction model put actions on the bottom and navigation on the sides, as swipes. That’s not a great pattern for a variety of reasons.

iOS started with a lot of apps using tabs on the bottom, and over time started aligning more with Android, who put a few key actions on the top, then a “swipe back” pattern for more options. Think of Mail on iOS, how you go into a message, then you can swipe from the left to get back to your inbox.

Windows Phone was left in an interesting spot. Many of us believed that the old interaction model just wasn’t going to work. You can’t stick navigation in a horizontal direction. It’s part carousel, part “mystery meat navigation” and it just doesn’t work. So. We needed to figure out what the new model would be.

Then you put the ribbon in what I called a “palette” or “drawer” on the bottom, and on the top right you can start putting “hero actions.” I argued for only one but I’m unsurprised that they ended up with more.

So there you go, right?

Bottom: Three dots to get the ribbon in palette form.

The problem is, there’s just way too many things on the top bar. For example, you might want to print. How do you do it? Well, you could design a print icon in the top bar. But it’s probably not worth it. You could hide it in the ribbon, but that sort of sucks for discoverability.

And then you notice the top left corner. And you think “Well, tons of Android apps just put everything there. Maybe we could try that?”

And so it became clear, due to the massive number of features in Office apps, and the extremely tight real estate, and alignment with tablets, that a hamburger was the best overall pattern.

Actually, good point. Look at Twitter on Android, iOS, and WP. Twitter does a lot of stuff, but they don’t actually need to use a hamburger.

So there you go – if your app does less than Twitter, and they don’t need a hamburger, you may not either.

But Office? Office really needs a hamburger. I have the scars to prove it.

Look for me talking about “Bondi Blue” elsewhere.

I think Windows 7 was exactly what it needed to be. It needed to be bold, different, and not like iPhone. Success!

Now we see where they take 10. I’m hoping for more visual polish over the coming months. Maybe even a bold new overhaul? We’ll see!

Some nice words about teams working hard on Windows phone.

Well I can’t argue that my answers make sense. I’ve re-read some and I’m like “wow that was confusing.” So, guilty.

But let me be clear: they are absolutely not neglecting it. I have close friends texting me late at night about how hard their whole teams have been working. It’s intense right now and trust me, neglect is the furthest word from the truth.

As far as change is concerned … I agree and relate to your disappointment. But there’s no magic bullet. There’s like 100 things, all of which they’re working on as hard as they can, and they all interrelate. It’s just a complicated issue. How do you get an Android or iOS user (both with very high user satisfaction) to join your platform? It’s super tough.

So I’m sorry you’re disappointed. Lots of people are. But if you take one thing from this, just know they’re not giving up or dialing back their work. Not even close.