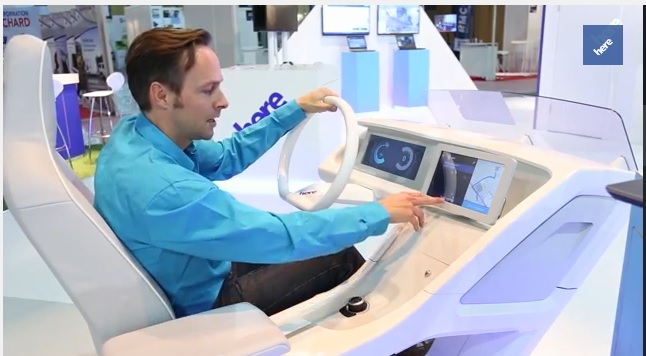 It seems, HERE’s latest embedded navigation system HERE Auto is already getting some love as the navigation power behind BMW’s latest BMW i3 at CES 2015. HERE has its events from 6th to 9th January, but HERE Auto already got some coverage due to its innovative features.

Latest HERE Auto has been described by Nokia as more modular, social and allows passengers to interact with the navigation system on their own devices. Read more about and watch HERE Auto in action by clicking here and here.

Automotive World in its coverage of BMW i3 describes HERE Auto as having impressively high-quality and very detailed maps that has the ability to update OTA. As described above, it does allow syncing with smartphones and also sharing of addresses with passengers.

At this venue, BMW ConnectedDrive is presenting a BMW i3 equipped with cloud-based connectivity and a HERE app that synchronises digital devices such as a smartphone with the vehicle’s navigation system. Destinations entered on the smartphone using the HERE Companion App are simultaneously imported to the car, where they can be used right away by the navigation system to compute a route, or can be saved as favourites. The cloud system also allows “over-the-air” updating, for example of navigation maps. Equally impressive is the high resolution of the map display in the exhibited BMW i3. This display, which takes quality to new levels, is three-dimensional and detailed. The navigation route is perfectly integrated in the 3D view and can be quickly interpreted and understood by users. Using HERE, the BMW i3 can also share destination addresses or estimated times of arrival with contacts, via text or email.