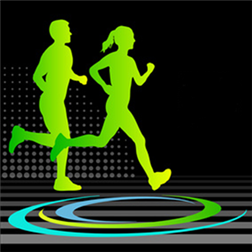 The Windows Phone app, which has gone free next as myAppFree app of the day is Beep Test. This test is used by coaches to estimate the maximum oxygen uptake of an athlete. Try it out by yourself or with your friends for a complete aerobic training.

procedure: This test involves continuous running between two lines 20m (6.5′ 7.4″) apart in time to audio beeps. For this reason the test is also often called the ‘beep’ or ‘bleep’ test. The runner stands behind one of the lines facing the second line, and begin running when instructed by the app. The speed at the start is quite slow. The runner continues running between the two lines, turning when signaled by the app beeps. After about one minute, a sound indicates an increase in speed, and the beeps will be closer together. This continues each minute (level). If the line is reached before the beep sounds, the runner must wait until the beep sounds before continuing. If the line is not reached before the beep sounds, the runner is given a warning and must continue to run to the line, then turn and try to catch up with the pace within two more ‘beeps’. The test is stopped if the runner fails to reach the line for two consecutive ends after a warning. Your fitness level will then be calculated based on how long you can keep the pace. An audio beep and visual cue will indicate marker and stage changes. The Beep Test is a standard fitness test used by Sporting Teams The app supports following features – group or single runner test – import contacts from phone address book – group results for test day – runner results for all tests – multiple training groups – automatically calculated fitness lever and VO2max value per runner – visual and audio progress indicator