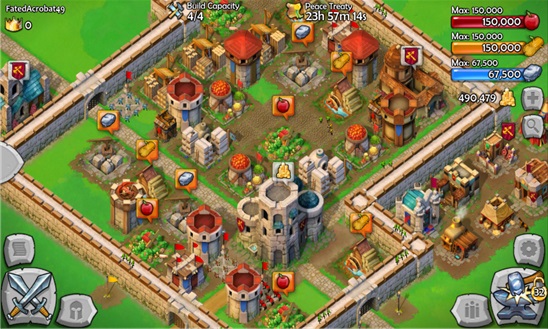 Age of Empires: Castle Siege has received a new update for windows Phone Devices. The new version is 1.6.1.43. The update brings lots of gameplay improvements and bug fixes.

•Decrease Farm/Mill/Quarry build times to encourage players to upgrade resource collecting buildings.
•Increase storage building health to make them more difficult to snipe.
•Increase damage output of Raiders, Muscovy Knights, and Sviatoslav against storage buildings to balance increased storage building health.
•Increase Peace Treaty lengths to reduce the number of times a player is attacked while away.
•Increase production research tech bonuses from Cathedral Resource.
•Total percentage of resources available to be looted in an attack will decrease as player Age increases to allow players in later ages to save enough resources to make purchases.
•Attacking a player via revenge removes the attacking player’s Peace Treaty.
Bug Fixes
•Viewing unit info for donated units should now display the donated unit’s level and stats instead of the player’s trained units.
•When a player has donated a relief unit, you will be displayed a message, but nothing will appear in the Alliance chat. These changes should help alleviate the resource issues we have been seeing at higher Ages.