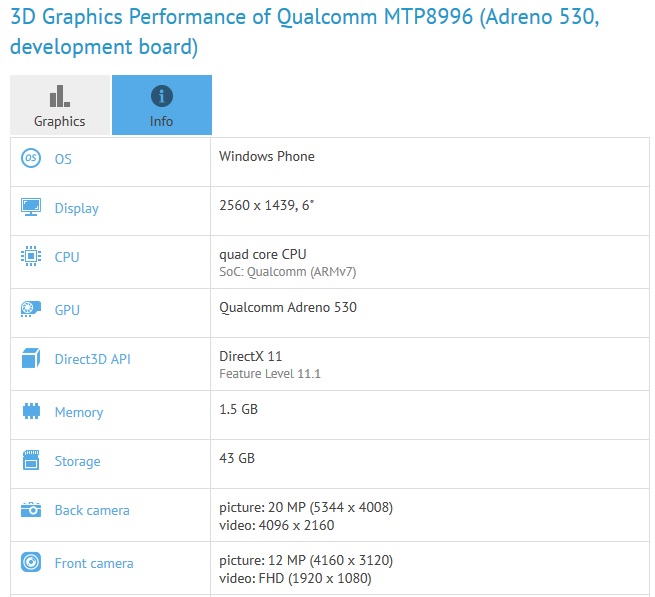 We earlier reported about the first Windows 10 Mobile device named HP Falcon running Snapdragon 820 from a GFXBench entry. You can read all about HP Falcon leaks by clicking here.

Now one more Windows 10 Mobile device has been seen in GFXBench data and it too packs Snapdragon 820 processor and Adreno 530 GPU. The device seems to have a 22 MP Rear camera and 12 MP FFC . It will also pack a 6-inch, 2560 x 1440 display. The RAM seems to be around 3-4 GB, as the free RAM in entry indicates. Internal storage seems to be around 64 GB or it may support a SD card with 32 GB internal storage.

Sometime ago we broke this exclusive piece of news via our sources that Microsoft is already testing Lumia prototypes based on Qualcomm’ latest Snapdragon 820 processor. The name of this listing is “Qualcomm MTP8996” and in past we have seen that Windows Phone prototypes with such generic names are usually the first testing prototypes by Microsoft for a new Qualcomm processor.

Microsoft is also testing a Flagship device based on upcoming Intel chip and these two devices may be destined for a Q3 2016 launch, but such plans can change in long run.