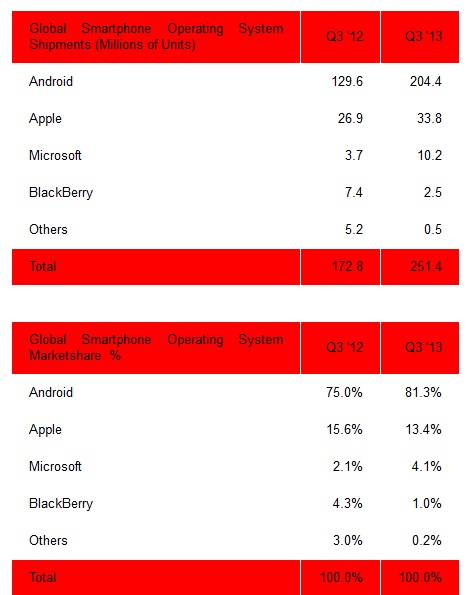 Another analytics firm report  has confirmed impressive growth in Windows Phone market share in Q3 2013. According to Strategy Analytics report, Windows Phone has been responsible for 4.1% of global smartphone equipment which tallies well with what “ABI research’s report” tells us. But while ABI’s report puts total WP shipment volume at 9.76 million, Strategy Analytics says it may have crossed 10 million for the first time in  a quarter.  SA report says that WP smartphone shipments grew by 178 percent Year on Year in Q3 2013 and it is currently the world’s fastest growing major smartphone platform.

According to the report, this growth is almost entirely due to Nokia and its steadily improving Lumia portfolio across Europe, Asia and the United States.

Microsoft shipped more than 10 million smartphones worldwide in a single quarter for the first time ever in its history during Q3 2013. Microsoft has doubled its global smartphone marketshare from 2 percent to 4 percent in the past year. Microsoft grew its smartphone shipments by 178 percent annually in Q3 2013 and it is currently the world’s fastest growing major smartphone platform. Microsoft’s growth is almost entirely due to Nokia and its steadily improving Lumia portfolio across Europe, Asia and the United States. However, Microsoft is clearly still at a low level of share worldwide and it is struggling to gain serious traction in several major markets like Japan, South Korea and Africa.

The losers have been Apple and BlackBerry which saw their market shares eroding in Q3, with Android and Windows Phone being the gainers!!

Thanks Phom for the Tip. Cheers!!