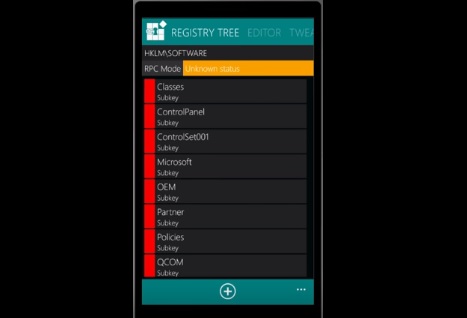 It’s currently limited to LUMIA/SAMSUNG phones, although we’re trying to extend it to other OEM Device, of course. (It requires specific Driver/Services to “RUN” into “SYSTEM” Privileges. Hence, other OEM Device is lack of these. I.e HTC/Micromax etc. etc.)

A brief summary, for those unfamiliar with interop-lock:
Windows Phone allows a number of high-privilege app capabilities, which can be used to make changes to the OS which are normally not possible for a third-party Applications.
The limitation on whether we can use these capabilities or not is based on what “level” of developer unlock the phone has.
ON WP7/8/8.1
Standard “ISV” (Independent Software Vendor) Dev Unlock (max 10 apps or less) is what pretty much everybody gets.
OEMs, however, get a special OEM Developer Unlock (300 apps or more) which gives them the ability to use much higher-privilege app capabilities than the standard ISV unlock permits. The name comes from ID_CAP_INTEROPSERVICES, the capability which was most important in WP7/WP8/8.1.
However, there are a great many interesting capabilities. Note that Interop-unlock by itself does not enable all of these. However, at least on Lumia/Samsung phones, it is now possible to enable *all* the capabilities.
As per my Research Microsoft has give up some FREEDOM to the 3rd Party Developers. Now the “ISV” Developers can sideload apps with the All “SECOND PARTY CAPABILITIES”. However, having a Some hive privilege “SYSTEM” Resource that we can expand it to Enable All Capabilities.

The instructions are as follows:

1. Turn “ON” Developer Unlock Mode. (Go to Settings> Update & Security> For Developers)
2. Download “Root Tool.xap” from attachments and deploy It.