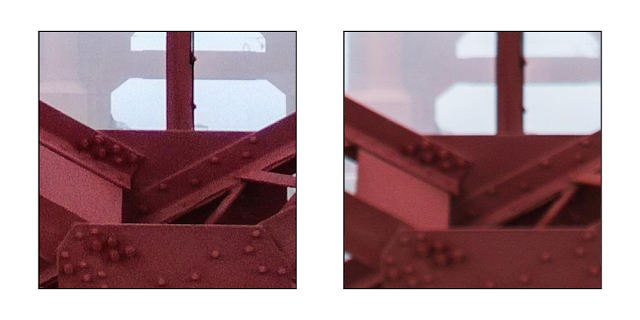 “The Electrical Engineer” blog has pitted Lumia 1020 against Nikon D800e (36 MP) with a 28-105 mm lens with and has done “as much Apples to Apples comparison as possible” on auto settings.

But exactly what would be fair wasn’t easy. The Nikon is a very versatile machine producing images no smart phone could match. To keep it as apples to apples as possible, the cameras should be taking the same image from the same place with the same view. The only lens that would match was an older 28-105mm Nikon Macro.

I would venture out into the city, lens attached, phone in hand. No tripods, no live view, and no bursting. I would simply compose the shot with the Nikon and then do it all over with the Lumia. It wasn’t an attempt to conclude that you could or should leave your SLR at home, but simply how much you would be missing by choosing your phone.

It is very interesting to go through the comparison sets and finally to reviewer’s conclusion. Have a look at crop comparison sets and one set of uncropped images below. Lumia 1020 is on left and Nikon D800e on right in crops. The reviewer has done both daylight and low-light imaging comparison. For going through all the sets you will need to click the source link at the bottom of the article.

The Lumia 1020 impresses with its sharpness and details  captured even bettering the DSLR in some crops (but not obviously in all) and this is what reviewer concludes,

It’s always hard to come to any definitive conclusions when comparing vastly different cameras and this is no exception. It comes across that I’ve been overly generous to the Nokia in the comparison, but on the other hand I feel it has earned it. Could the Nikon beat the Nokia on every image? A definitive yes. The lens 28-105 appeared to fall short of the resolving power a 36 mpix sensor could muster. Choosing a better lens, choosing to use a tripod, choosing to use mirror lock up could easily have turned this into a Nikon shutout. This is to say nothing of the boundaries you can push the Nikon’s astounding RAW files.

But I didn’t bring a tripod, I didn’t have the best 28mm lens, I used auto focus, and I didn’t do anything that needed the benefits of RAW. I believe that is where the Nokia shines. It took the photos in the same wind, with the same photographer, of the same scene. It lent me all the controls I would want, and more then enough resolution to be satisfied.

But with RAW DNG support coming to Lumia 1020 soon, may be reviewer will have chance to do a RAW to RAW comparison and push the boundaries on Lumia 1020 RAW files as well.

Nokia did something special with the 1020. More than any other camera phone, they made the 1020 feel like something meant for a photographer. It’s always there in your pocket. A nondescript phone packing a camera that under the right conditions holds up against a bigger SLR rival.

I went in thinking the Nikon would blow the 1020 away, but was pleasantly surprised to find otherwise. It’s not an SLR replacement, nor tries to be. But when the camera you have on you is what matters, I now feel I’m making less of a compromise then I had before.