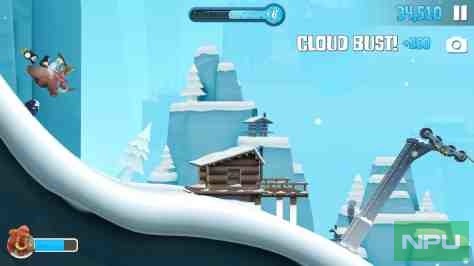 Ski Safari 2, one of the best skiing game is now available for Windows Phone devices. At 8 months away from Ski Safari 2 release for Android and IOS, the game is now landed on Windows platform. And also its worth to note that the game is Universal and available for Windows 10 PC too. The first sequel of the game i.e. Ski Safari was not good as Ski Safari 2 is, so you must try this game on your device.
In this game you play as Sven’s sister Evana, performs some new tricks on snowboards and skis and ride on crazy new animals. Check out game description below.

The world’s most fantastical, fun, family-friendly skiing game is back and better than ever! Play as Sven’s sister Evana, perform awesome new tricks on snowboards and skis, and ride on crazy new animals! Oh, and watch out for the avalanche! “Raaarrooorghh!” – Yeti Escape from forces of nature and team up with friendly animals as you race down the mountain! – Will you play as the intrepid Sven or his lovely sister Evana? Will you use skis or a snowboard? Will you ride a snowmobile, a motorbike, or something a little more crazy? – Perform tricks and hit the mountain in style! Pull off 360 spins, handstands, snowboard nose-grabs, and strike daring poses – each animal has their own stylish moves! – Collect coins to purchase new gear, crazy costumes and powerful vehicles in the shop! Isn’t it time you thought about that gold sled you always wanted?