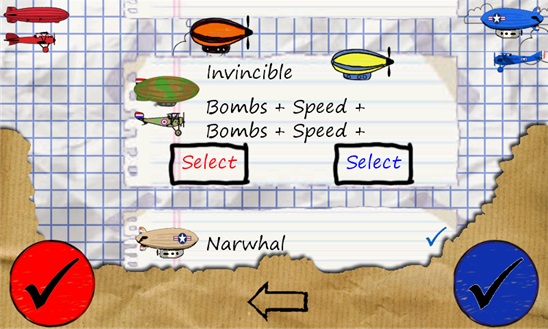 Windows Phone game Doodle Bomber 7 boasts of very cool graphics and addictive game-play. This has not attained the popularity, it deserves yet. One reason behind that may be it being a paid game. But, it has gone free for limited time at Windows Phone store as the myAppFree app of the day. So, rush and grab!!

Play as the bombardier in an airship dropping bombs on the numbered targets below as you fly back and forth over the canyon. This single button game with its three simple rules lets everyone quickly learn how to play. But it its underlying depth and strategy soon emerge to challenge even the experienced gamer to complete the game.

1. Press the button to release a bomb.
2. Drop at least one bomb per pass.
3. Clear all the targets before you miss three times.

The altitude and speed of the airship varies each pass and so the path the bomb will take. Halfway through the airship will be replaced with a faster biplane. The red CPU airship can sometimes assist you, but you must beat its score to claim the level.