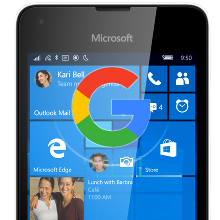 To remind you Microsoft is holding an Event tomorrow in which they will show bunch of devices including their new flagship Lumia 950 and Lumia 950 XL running Windows 10 Mobile.

Now a new report claims that Google is bringing their apps like YouTube, Hangouts, Google Voice and Google Play Music on the Windows 10 Store. And the new report even suggest that an Google’s spokesperson will reportedly take stage with Microsoft’s tomorrow event and show the Google apps running on Windows 10 Mobile.

We will keep you up to date on tomorrow event so, Keep an eye on NPU !