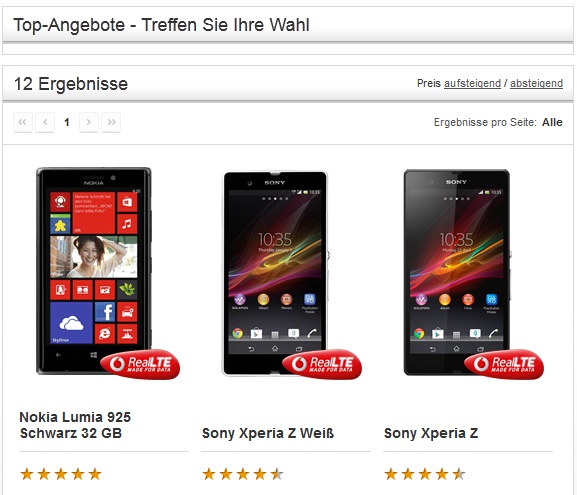 Lumia 925 seems enjoying good steady demand in Germany. We have checked many times in last few weeks and it is in top-selling devices list at three major carriers O2, Vodafone and T-Mobile. Let us have a look at how Lumia 925 is doing at the carriers in Germany.

At O2, Lumia 925 is currently 6th most popular device and while it is behind iPhone 5 and SGS4 in popularity, it is more popular than Xperia Z, HTC One etc.

At T-Mobile also, it is there in the top-selling devices list along with Lumia 920 though this list doesn’t reveal ranking but good to see it there.

Coming to Vodafone which has exclusivity on 32 GB version of Lumia 925, it is in the most popular devices list.

The real issue with Lumia 925 has been it getting shadowed by Lumia 1020 due to closer release of both devices and many prospective buyers holding for Lumia 1020.  One more issue is the only 16 GB version at most of the carriers and retailers.  Nokia  will be really wise to bring 32 GB version to more markets.