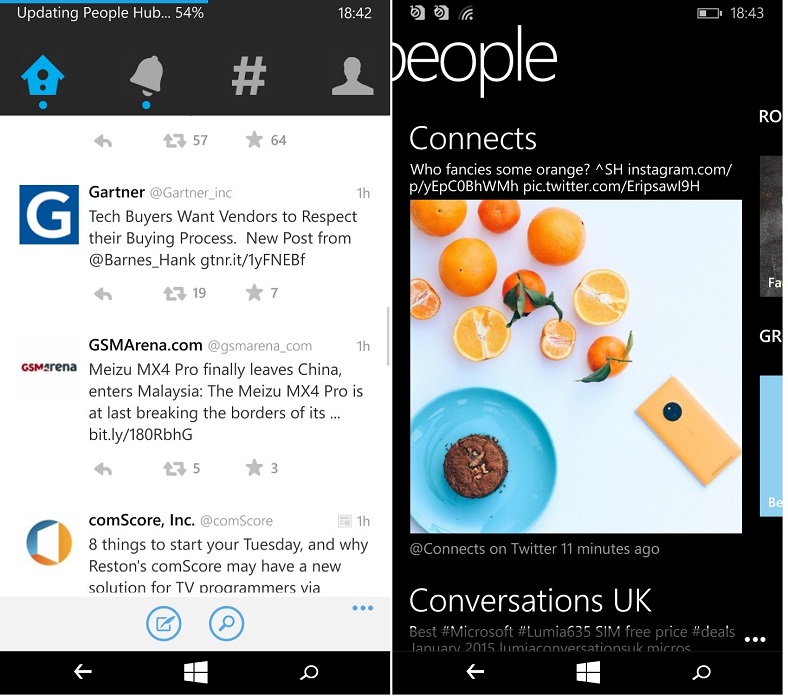 Official Twitter app for Windows Phone has received its long due update. The update brings the People Hub integration to the stand alone Twitter app and this means you don’t need to configure “Twitter account” in “email + accounts” anymore and still the Twitter updates will appear in the people hub.

As you can see in the above screenshot, after the update when you fire the app, it updates “People Hub” and second screenshot is from the “People Hub” showing Twitter timeline. You can also download people you follow to the people Hub from settings and switch on or off the people Hub integration.

Apart from People Hub the latest Twitter app bring integration to the Photos Hub too. You can now see your photos in the native Photos app on Windows Phone.

And, now we have official changelog from Microsoft that still looks lacking but adds to what we have already told you.

Seems, there is a bug that stops this version of Twitter from launching, when you tap the Live Tile and you need to be running the latest Windows Phone 8.1 GDR1 Build.

There is a bug in older builds of Windows Phone 8.1 that prevents the Twitter app from launching when you tap on the tile. You will want to make sure you are running the latest available update for your Windows Phone (or from the Preview for Developers if you are running a preview build) before installing this update. If you do encounter this issue, there are a few steps you can take to get the Twitter app working again: you can go to Settings > Backup > apps + settings and choose “Backup now”. Alternatively you could try to uninstall and reinstall the app.