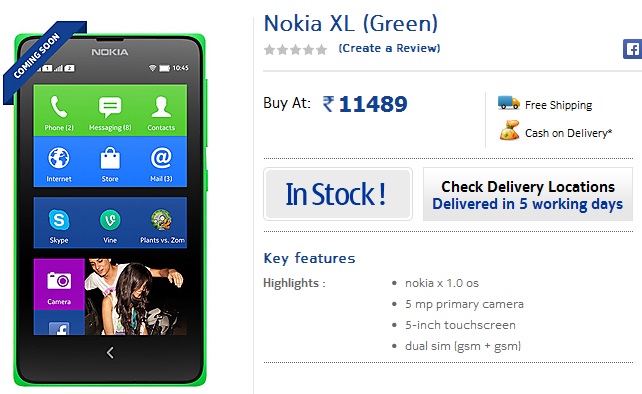 Nokia XL, which was launched in India some days back without any solid info about launch date and pricing has been soft released by Microsoft now. The device is in stock at official Nokia Store and retailer Infibeam and is priced 11,489 at Nokia store. However you can save a bit at Infibeam, where it is priced Rs 11, 350. Only Green color model is available at Nokia Store, while Infibeam shows availabilities of other color models as well.

Nokia XL is flagship device of Nokia X range which runs on Android based Nokia X OS. The price puts it directly in competition with recently released Lumia 630, though it tops up Lumia 630 with its 5 MP camera with flash and a 2 MP FFC. Lumia 630 on the other hand has a quad-core processor as compared to dual-core on Nokia XL.

You can read our Nokia X review and watch hand-on videos of Nokia X for diving into the details of AOSP based Nokia X OS.