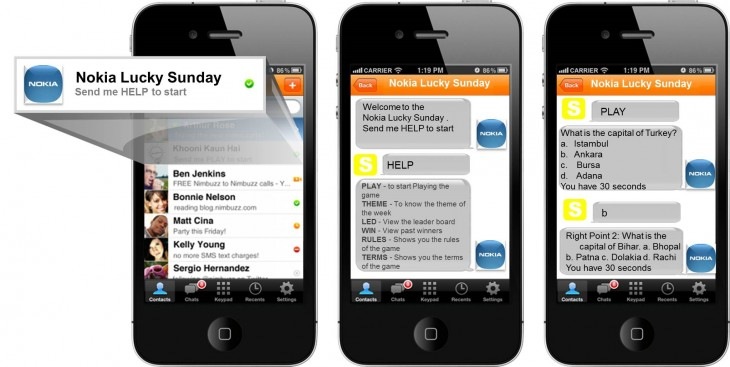 Nokia India has launched a interesting marketing campaign to reach to users on other platform or even using feature phones. This will be done through a dedicated chat buddy called “Nokia Lucky Sunday” using IM application Nimbuzz. Nimbuzz has 150 million strong user base and is available on all major platforms such as BlackBerry 10, Android, iOS, Symbian, Windows Phone, and J2ME, as well as Windows and Mac computers.

Nokia’s chat Buddy “Nokia Lucky Sunday” will appear as a contact on the roster of all Nimbuzz users in India and start to quiz users and reward them with prizes. That’s over 25 million users, or a quarter of the entire mobile Internet population of the country. With every correct answer, the user moves a leaderboard and the top users stand a chance to win Nokia smartphones at the end of every Sunday.

So, what do you think? Will it provide Nokia enough opportunity to reach and  tap potential converts to Nokia and should Nokia bring it to more markets?